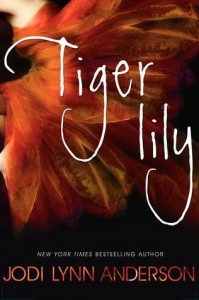 Summary: Before Neverland faded into myth, it was a remote and dangerous island filled with deadly mermaids, psychotic pirates, and watchful faeries. And before Peter Pan belonged to Wendy, he belonged to the girl with the crow feather in her hair . . . Tiger Lily.

When fifteen-year-old Tiger Lily meets the alluring teenage Peter deep in the forbidden woods, the two form a bond that’s impossible to break, but also impossible to hold on to. As the leader of the Lost Boys, the most fearsome of Neverland’s inhabitants, Peter is an unthinkable match for Tiger Lily. With her betrothal to another man and deadly enemies threatening to tear them apart, the lovers seem doomed. But it’s the arrival of Wendy Darling, an English girl who’s everything Tiger Lily is not, that leads Tiger Lily to discover that the most dangerous enemies lurk inside even the most loyal and loving heart. (image via Goodreads, summary via Amazon)

Review: It was a chilly afternoon when I discovered Tiger Lily, a re-telling of the classical Peter Pan. I was excited to read the book, especially knowing that the novel would focus on Tiger Lily’s, a character who is often treated with  disrespect. I found the concept to be unique, interesting and worthy of my time. I thought Anderson’s decision to re-tell Peter Pan from a different perspective, one from a character of color, was a bold move. I applauded her, in fact.

Anderson had a wonderful opportunity to give voice to one of classical literature’s most misunderstood characters and instead of narrating her novel from Tiger Lily’s point of view, she choose to use Tinkerbell. Now, I love Tinkerbell, do not get me wrong, but the emotional impact of Tiger Lily’s story would have stronger if the reader was in her head during the entire novel. Anderson explains that Tinkerbell is able to understand Tiger Lily’s thoughts because the little fairy empathetic and can read the changes of the heart and mind. Interesting concept, unfortunately, this makes Tinkerbell an unreliable narrator. Because the reader cannot trust Tinkerbell, our perception of Tiger Lily and the decisions she makes is warped.

Tinkerbell makes many assumptions about Tiger Lily and is often unsure of her motives, especially when Tiger Lily makes a very out of character decision in regards to Peter. I feel that if the reader was privy to Tiger Lily’s thoughts in that moment, understood her motivation, I wouldn’t have been angry at the character. Instead, I felt like some of the choices Tiger Lily makes is for convenience of the story and not very true to the character – solely because of Tinkerbell’s narration.

Choosing to use Tinkerbell as the narrator, instead of Tiger Lily, also brings up the very fact that another character of color’s voice was muted. This simple fact makes me quite angry. In 2013 when the call for more diversity in YA literature by readers and authors is getting louder, to have the opportunity to write outside of one’s comfort zone and write a strong character of color, but don’t, is heartbreaking. Anderson had a wonderful opportunity to push her own personal writing boundaries, to give voice to a people not usually heard from and she chose to not take it. Instead, the novel often times feels like a National Geographic special where the colonists are observing the natives and making assumptions based on the people’s actions. Tiger Lily did not end up being a distinct character and ended up being more of a stereotype/stock character.

Despite using Tinkerbell as the narrator, Tiger Lily is still an entertaining read. Anderson does create a world that fits into our previous knowledge of Neverland, while being different and wholelly her own. Her Captain Hook and Mr. Smee are not entirely one note characters, and she does turn Wendy into a character that one loves to despise. To me, Anderson has an unfinished story here and while Tiger Lily is good, Anderson needed to go the extra mile to make it great.