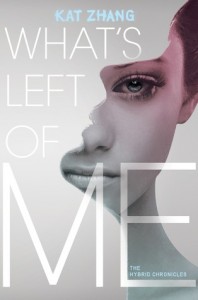 Kat Zhang, the author of What’s Left of Me (a book you should totally read!), was kind enough to answer a few questions for us this week —
The idea of two souls in one body is a fascinating one. What gave you the idea to create an alternate universe where this was the norm?

I don’t really have a super interesting story to tell about how I came up with the idea for WHAT’S LEFT OF ME, unfortunately. I wish I did! Really, though, I just started wondering one day–everyone has a bit of an internal monologue going at times; what if that little voice in the back of your head was a real person? What would it be like to live trapped in your own body? That was how the idea for Eva began, and the rest of the story grew around her.

There are a number of siblings in What’s Left of Me. Would you consider siblinghood a central relationship in What’s Left of Me?
I think so. I know my editor has said that it was one of the things that really drew her to the story. I’ve always been really interested in relationships–not just romantic ones, which are the ones most popularly explored in fiction–but the special, unique relationships that human beings can form with each other (or sometimes with animals or even inanimate objects!).
In WHAT’S LEFT OF ME, there are two kinds of sibling relationships–that between “normal” siblings, and that between the two souls that share a body. Funnily enough, I don’t think I based the latter off my idea of “real” sibling relationships (though many people do say it reminded them of such!).
It’s always said that authors are also great readers. So — any book recommendations? Who are some of your favorite authors?
I’m sadly not as prolific a reader as I wish I were. The funny thing about publishing is that it often keeps you so busy (especially if you also have another job/school/ etc), that your reading time shrivels up! I tend to stick to recommending the classics of my childhood–things like THE GOLDEN COMPASS, and ENDER’S GAME, and SABRIEL 🙂 I have favorite books more than favorite authors.
So you just got back from the Young Authors Give Back Tour. Sounds fun, but what’s it all about?
It was a lot of fun! Basically, Erin Bowman, Susan Dennard, Sarah Maas, and I traveled for 2.5 weeks all along the North East, starting in NYC for BEA and ending at Anderson’s in Chicago. We hit 7 cities along the way. The special thing about the tour was that we wanted to do something more than the usual book signing/panel stuff, so in each city, we also gave free writing workshops to people aged 13-22 (in general…some others slipped in ;P). It was a fantastic experience working with so many young writers!
Final question: Are you ready for the release of Once We Were?
Definitely! It’s nerve-wracking, too, because it’s the first book I wrote on deadline, and the first book of its kind that I’ve ever written (and really, just only the 3rd book in general I’ve ever finished). But I’m very excited for everyone else to read it, too!
—- 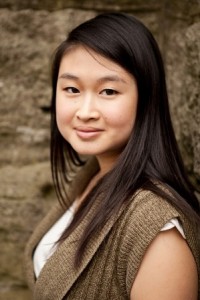 Kat Zhang spent most of her childhood tramping through a world weaved from her favorite stories and games. When she and her best friend weren’t riding magic horses or talking to trees, they were writing adaptations of plays for their stuffed animals (what would The Wizard of Oz have been like if the Cowardly Lion were replaced by a Loquacious Lamb?). This may or may not explain many of Kat’s quirks today.
[Author photo and bio via Goodreads]

One Reply to “Interview: Kat Zhang”