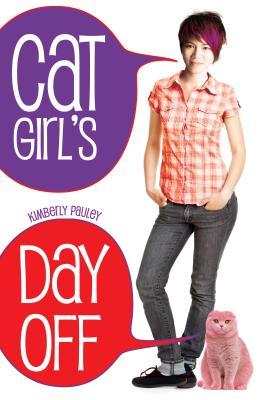 Kimberly Pauley, the author of Cat Girl’s Day Off (which I reviewed here) as well as several other hilarious books in the Sucks to Be Me series, was kind enough to answer a few questions for Rich in Color this week.

I’ve always had cats — at least, until we moved over to the UK about three years ago. We are currently pet-less. We had to leave behind our cat Gracie with my mother, as Grace was too ill too travel so far (or go through quarantine!). Sadly, Grace has since passed away from cancer.

I wanted the Talent to be the main character talking to some small furry creature and it had to be one that was common enough to be around everywhere. That left pretty much dogs, cats, or squirrels. Or, I guess I could have done birds, but cats were my favorite and, honestly, they are inherently snarkier than dogs. I needed an animal with a mind of it’s own and cats definitely have that!

Natalie’s friends and family are just as colorful and quirky as the cats. If everyone had Natalie’s Talent, do you think they would get along with the cats?

Oscar definitely would and probably Melly too. I’m not sure about Nat’s mother, as she is very strong willed and so are cats…there would be a lot of conflict there, I think.

How did you choose Natalie’s ethnicity?

I am half-Chinese and I always knew I wanted Nat to be half-Chinese as well. It was nice to be able to use some of my own experiences growing up and I consciously wanted the book to be multicultural (but not in an in-your-face kind of way — it doesn’t really matter that she’s half-Chinese to the story). Her last name (Ng) is actually from my aunt’s family, though our family name was Lee. That’s just such a common name that I thought it would be nice to go for something a little less common and potentially tongue-twisting for non-Asians (though, honestly, I don’t understand why people mispronounce it…it’s only got two letters!).

I have to admit that I’ve never watched Ferris Bueller’s Day Off. Why did you choose that particular movie as the springboard for Cat Girl’s Day Off?

A few reasons — I wanted to set the book in Chicago as that’s where I was living at the time. Ferris was conveniently not only set in Chicago but the film locations used (i.e. Nat’s high school) were out in the suburbs near where I lived. I was able to do a lot of research, visiting Wrigley Field and things like that. Also, I absolutely love that film (and John Hughes films in particular) but given the way I was writing it, it didn’t necessarily have to be a film that people reading the book have watched. Though I do hope some people go out and watch it now! It has aged really well, I think.

The hilarious Sucks to Be Me has an equally hilarious sequel. Do you ever intend to write a sequel to Cat Girl’s Day Off? Or another book set in the same world of government classified Talents? (Because that would be awesome.)

Thanks! I’m actually writing a third Sucks to Be Me book as a bit of an experiment where readers participate by voting at the end of every chapter. You can find out more about that at http://www.kimberlypauley.com/stbm

And it’s funny you ask about another book in the same world…my w-a-y back original idea was for the books to be a series where each one had a different main character, each dealing with a bizarrely useless-appearing talent. Originally they were all going to meet up in a support group for Class D Talents. There was going to be a guy who could only go invisible once a day…for a limited time. And a girl who could change the color of her hair depending on what she ate. And other bizarre Talents that would somehow prove useful in the end.

I would love to write a sequel to Cat Girl’s Day Off and I do actually have a loose outline for a book (it would be called Don’t Call Me Cat Girl and involve a large cat, probably a lion or a tiger, and Nat dealing with her newfound fame). Will it ever happen? I don’t know. I won’t say no, but it would help if there were people out there clamoring at the publisher to have one made. 😉 Lately, I’ve been writing more serious and dark stuff — my next book, Ask Me, is coming out in April 2014 and features a girl with the power of an Oracle who winds up right in the middle of a deadly mystery. 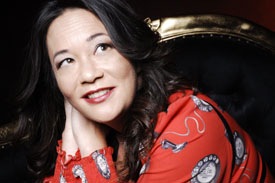 Kimberly Pauley wanted to grow up to be Douglas Adams, Robert Heinlein, or Edgar Allen Poe, but has since settled for being herself and writing her own brand of quirky. Born in California, she has lived everywhere from Florida to Chicago and has now gone international to live in London with her husband (a numbers man) and the cutest little boy in the world (The Max).