Earlier this year I came across a novel that I absolutely loved and I told the RIC team, “we have to discuss this!” Jason Reynold’s debut novel, “When I was the Greatest” is not your typical “life in the hood” novel and we all enjoyed reading and talking about it. 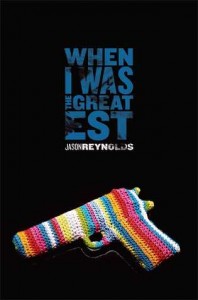 In Bed Stuy, New York, a small misunderstanding can escalate into having a price on your head—even if you’re totally clean. This gritty, triumphant debut captures the heart and the hardship of life for an urban teen.

“A lot of the stuff that gives my neighborhood a bad name, I don’t really mess with. The guns and drugs and all that, not really my thing.”

Nah, not his thing. Ali’s got enough going on, between school and boxing and helping out at home. His best friend Noodles, though. Now there’s a dude looking for trouble—and, somehow, it’s always Ali around to pick up the pieces. But, hey, a guy’s gotta look out for his boys, right? Besides, it’s all small potatoes; it’s not like anyone’s getting hurt.

WARNING: SPOILERS THROUGHOUT THE DISCUSSION

K. Imani: The one aspect I loved about this novel was that it wasn’t the typical “hard life in the hood” novel. While Ali did make note of how economically depressed his neighborhood was, the focus wasn’t on how hard life was or “thug life” or drugs or anything negative. The focus of the novel was on family and friendship, and dealing with the consequences of the sometimes stupid decisions that teenagers make. I loved that Ali’s family was just a regular, hardworking family that is actually the majority of families that live in most urban cities. It was a refreshing novel in a literary landscape that believes the “hard life in the hood” novels are the only ones that sell.

Crystal: I totally agree on this point. I found it nice that it touches on some of the outside issues of where they live, but that isn’t the focus.

Jessica: Yes! I love that the family had such a range of characters — Ali’s father has some problems, but is a good guy underneath it all; Ali’s is incredibly hardworking, no-nonsense and sensible; and Ali’s sister is just adorable. The story is as much about Ali’s family as it is about Ali and his friends.

Crystal: The relationship between Ali and Jazz is great. I love the scene when she braids his hair. “…I always loved her braiding my hair. Me acting like a punk, her yanking extra hard just to be funny. Even though I was in pain for most of it, I still loved it” p 103. They talk to each other – and it’s  about things that matter.

Jon: I half agree, half disagree. While When I was the Greatest didn’t focus on the “hard life in the hood” stuff, it still seemed a central theme of the book. It’s certainly not a dominant theme, but I was expecting a book with such interesting characters and setup to expand somewhere else. Instead, the tone of the writing made it seem like Ali was speaking to someone (us) about his version of Brooklyn, and not from his perspective, but as someone aware that there were outsiders looking in.

However, that could just have been my expectations, to have a story that completely deviated from the “typical” book. Either way, I was a bit disappointed with any character who seemed even slightly cut out of cardboard. Case in point: Noodles, who was basically the “bad” best friend who gets into trouble.

K. Imani: I also really liked the way Needles’ disability was handled. Ali never said the words that Needles shouted, just alluded to it. I like that it delved into how sometimes Needles’ outbreaks were stressed induced and the toll it took on the brother’s relationship. I also greatly admired how Tourettes was used in this story as just another illness instead of being sensationalized. How did the depiction of Needles work for you?

Crystal: I thought it was done well as far as I could tell. I don’t have much experience with this, but like with any good writing, it usually works if the character is written to be more than their symptoms.

Jon: In contrast to his brother, Noodles, I think Needles was a unique and interesting character. If anything, it felt like he was the driving force of the book, and in an alternate universe, it would be interesting to have seen the events of the book from Noodles’ perspective. Sidenote: I found Jazz, Ali’s younger sister, to be a compelling character too, and wished for more screentime for her as well!

Jessica: Definitely loved Needles more than Noodles, if only because Needles sounded like a sweet, thoughtful guy. Noodles’ anger at the world terrified me to read, but, at the same time, it’s not such a far-fetched thing, is it? He’s got reason to be angry at the world. I was glad to see Ali’s mother come up with a coping mechanism for Needles and show knowledge/understanding of him.

K. Imani: The cover. I wasn’t that thrilled by it and feel it didn’t fully reflect the themes in the book. I understand the needlepoint, but a needlepoint of a gun? Really? When this book was so not about that? What do you all think?

Crystal: As someone who knits, I looked at the cover & just thought it was an artsy way to show a gun up until Needles started knitting. Then I was flipping to the front cover and looking it over again. I found it so cool at that point. I think a ball of yarn with knitting needles on the cover wouldn’t necessarily attract a bunch of male readers, but it still hints at the knitting this way. You get the tough gun, but the knitting mellows it and still reveals a bit about the story. I have read a lot of books that have characters knitting, but this was certainly way different than the rest. Loved it.

Jessica: Wow! I totally hadn’t connected the knit gun to Needles’ knitting. That makes way more sense now… It’s pretty cool, though I’m also puzzled about what the gun was about.

Crystal: I thought the gun was just representative of Ali’s worries about the gun he saw in his father’s car and whether or not it would be used. His father made some poor decisions in the past and Ali is very concerned that it will become an issue after Ali got himself in a predicament with the rough guys.

K. Imani: I agree with you Crystal that the gun was representative of the one Ali saw in his father’s car, but that was minor, at least to me, than the overall theme of the story. It’s like he worried about it, understood why his father had it, but even in the altercation that got him in trouble, there wasn’t a gun to be seen. I just feel like there is this “idea” that if a story takes place in the hood, then lets glorify the guns. It really irritates me.

Crystal: Agreed. It glorifies violence and perpetuates that stereotype of urban lit. It was a small part of the story so to give the gun center stage was not my favorite choice. I admire it artistically though. It paired something soft that usually isn’t associated with guys living there with the cold and deadly that people may expect from an inner-city. The artist that made the gun does yarn graffiti and I find much of her work pretty cool. http://www.magdasayeg.com/about.html  A basketball or something else may have been a better choice.

Jon: Ugh, after reading the book, I don’t think the cover is a fair representation at all. Yes, the cover intrigues with the knitted gun, but the actual weapon played such a small role in the overall story that I felt like it was chosen as the cover object because of the “hood = violence” connection. I understand what the publisher was going for — I used to follow a blog about yarn bombing — but agree with K.Imani that it just irritated me to have a gun on the cover of this book which seemed to be trying to rise above that.

Jessica: Definitely could do without the ‘urban = violence = guns’ thing, but… Maybe it’s supposed to be challenging readers’ expectations? It’s a gun, but it’s a cute rainbow gun knitted from yarn! Like tha? Hm.

What do you think? What are your thoughts on “When I was the Greatest”? Please share to continue the discussion.