A few weeks before Christmas I received an email that took issue with one of my book reviews. The author of the email had every right to express their opinion on my review and I appreciate the feedback. As I pondered how to respond, a deeper thought occurred to me, and one that I felt could be best explored through a blog post and hopefully result in a honest discussion about the writer/reader relationship. 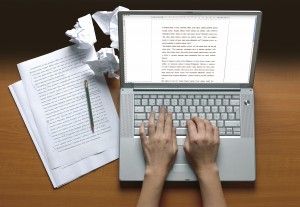 I come at this issue from both the point of view of a writer and a reader/blogger, as I can see both perspectives based on personal experience. As a writer, I know and understand the extent of the writing process one goes through when writing a book and the personal investment one has when sending out their creations into the world. A novel is not written overnight; no, it can usually be years in the process. Depending on the author’s style, they may do years of research, outlining, character histories, etc. And those are the novels that get published. A writer will probably have a few completed novels that are just sitting on the shelf, never to see the light of day. So I can understand how authors can sometimes be sensitive to criticism of their work. After all, when crafting a story, a writer is making specific decisions (albeit sometimes unconsciously) about the characters, the plot, setting, themes, etc. Sometimes the writer is aware of their intentions with a novel and sometimes they are not, that glorious experience when one is flowing usually in the drafting process, but the revision process is usually much more strategic and thought out. The key point is that writers chose their words, often carefully, and then send those words, those hard earned words, out into the world.

And that is where the tension between the writer’s intention and reader’s interpretation come into play. In his craft novel, “On Writing”, Stephen King notes that a novel is a conversation across time between a writer and a reader. The writer is expressing his or her thoughts at one point in time, and the reader is taking those thoughts, at another point in time, and making sense of the writer’s words. The writer and the reader will read the same words, however, the reader will also interpret the writer’s intentions based on what information the writer does or does not give, and based on the reader’s history. The writer, at this point, has no control over the reader’s interpretation because they are not with the reader and cannot share their writing process with the reader. The writer cannot share why or why not they wrote a character a certain way, or the reason why events in the novel happened the way they happened. The reader can only interpret the writer’s decisions based on the words on the page, but with this interpretation the reader brings his/her history, experiences to the novel. Two readers can read a book two different ways, and all ways are valid.

Case in point is the issue of Rainbow Rowell’s “Eleanor and Park”. Rowell’s 2013 novel was an NYT best seller and made a number of “Best of 2013” lists, mine included. It was, however, also part of a discussion on whether or not it was a racist novel, as RiC contributor Jessica stated in her blog post in March of last year. When I read in the novel, based on my experiences and history, I saw some of the troublesome aspects of the novel as a part of the characterization of Eleanor and not part of a larger issue. Author Ellen Oh, based on her experiences and history, had a completely different interpretation and reaction to the novel. In her blog post she states, “There was a period in my life when I was younger where I pushed away my culture and wished I wasn’t Korean. This was in direct correlation with the amount of racism I endured at the time. So I could understand Park, I could relate to him. But then I FOUND myself! I found my respect and love and pride for my culture. And I recognized just how important my Korean heritage was to me. Park never has that moment of self-discovery. And that is the greatest failure of this book. Because Rowell did not take the opportunity to really understand what it means to be multi-cultural.” Wow…when I read Oh’s powerful post about her reaction to the novel, I was troubled because I felt like I had failed to recognize how Rowell’s depiction of Park could be harmful, especially since I’m so outspoken about portrayals of PoC’s in literature. I read more and more critiques of the novel and continued to be troubled over my conflicting feelings with the novel. And then Mike Jung weighed in on the matter with his blog post about how he loved the novel, but yet can still be extremely critical of it. He states, “But if I’m going to keep my commitment to being a part of that effort (and I intend to), I’ll have to contain a seemingly endless supply of contradictory feelings inside my harried brain. That includes respecting the intent of authors who confront matters of diversity in their work, but honestly addressing their shortcomings, if only in the recesses of my mind; supporting dissent, critical analysis, and necessary confrontation by people who are my allies, but also safeguarding and expressing my own feelings and opinions that might differ from theirs; honoring and valuing my own life experiences, creative intentions, and finished work, but accepting the reality that I will learn things that force me to examine my own biases and blind spots; and on and on and on. “

I agree with Mike Jung’s assertion that we, as book bloggers, must respect the intent of authors who do the hard work of writing diversely, writing outside their comfort zone, but we also must continue to note where we feel they have succeeded and where they could improve. Because when writing diversely, authors will not get it right 100% of the time. A writer’s intentions could be pure and true, but because of a reader’s experiences the intentions of the writer can become muddled. Rainbow Rowell did not intend to write, at least I hope, a racist novel. In fact, she wrote a blog post about the very subject. She writes about the factors she believes that made her choose to make Park Korean, and why she wrote the novel.  She states, “Why is Park Korean? Because I think there should be more Asian-American characters in YA, especially boys (And also more chubby girls.) Because it’s up to people like me, who write, to write them. Because I don’t live in a world where everyone looks and thinks exactly like I do. And I don’t want to write about a world like that. Even though maybe it would be easier . . . Because my dad served in Korea. Because there was a boy on my bus whose dad loved his mom enough not to say good-bye. Park is Korean . . . Because that’s how I saw him the moment I saw him. And then I couldn’t imagine him any other way.” Based on her post, a reader can learn Rowell’s intentions and even understand them, but as we are reading the novel, we do not have access to the author’s thoughts. We only have access to what is written on the page, and there in lies the rub. Therein lies how a reader can interpret Eleanor and Park as a racist novel, even though that was not Rowell’s intention. Therein lies how two readers can have two completely different reactions to a novel and how a blogger can give a not so positive review to a book that ends up on an end of year book lists.

A writer can have all the best intentions when writing a novel, especially when writing diversely, but once that novel is out in the world and into the hands of the readers, anything is possible. Reading is, after all, subjective.

Links of essays quoted above
Is Eleanor and Park Racist? and Other Questions to Ask
Ellen Oh on Eleanor and Park
Cognitive Dissonance by Mike Jung
Why is Park Korean? by Rainbow Rowell