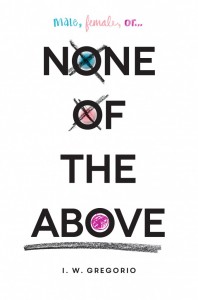 Review:  Not knowing much about people who are intersex, I was very interested in I.W. Gregorio’s novel. Being that she is a doctor, I trusted Gregorio to get everything right and to help the reader learn more about people who are intersex, but I also wondered if the novel could end up being an information dump. Turns out I was very wrong. None of the Above is a compelling novel that moved me, yet informed me at the same time. Not once did I feel like a voyeur, “watching” someone’s life who was very different from me. Instead, I was drawn into Kristin’s story and truly traveled on the emotional roller coaster she was on after she learned about her condition.

As Kristin learns about being intersex, so does the reader, but at no point does it feel like an info dump. We’re with Kristin as her doctor explains her condition, as she finds an online support group, as her father goes research crazy about the condition (what parent wouldn’t), and as she befriends a young woman who is also intersex. The information parts of the novel were spaced out just enough between the narrative bits of Kristin’s story that it didn’t feel burdensome. Gregorio also includes the case of the South African runner, Caster Semenya, to help the reader make a real world connection to what being intersex is. In fact, Semenya’s story helps Kristin figure out her new identity because Kristin is a track athlete herself. The sharing of Semenya’s story is actually a nice moment between Kristin and her father, of how much her father loves her, as he’s spending time researching Semenya and her story, wanting to help his daughter get back on the track team. This scene was a wonderful example of a loving parent-child relationship that is not often shown in YA fiction, and a perfect example of how Gregorio incorporated info about being intersex while still telling Kristin’s story.

The heart of any excellent story is a character that the reader can connect with and I really connected with Kristin. She has what seems like the “perfect” life, when suddenly she is thrown a curveball that essentially gives her an identity crisis. And that is where I felt for Kristin the most. The teenage years are all about self discovery and Kristin thinks she has it almost figured out, then she learns she’s intersex. Imagine having to basically re-think your own identity at the time you are trying to find your true self. How would you deal? And that is what makes Gregorio’s novel so good. Kristin doesn’t deal with it well at all, especially as someone she trusted betrays her and informs the entire school of her condition, but instead of getting it right, they think that she is Trans, so everyone thinks she is a boy trying to pass as a girl. The bullying Kristin receives from that is horrible, but very real. I like that Gregorio didn’t hold back or sugar coat the ugliness that Kristin experiences. It’s hurtful and painful, but very true to the story. Kristin reacts as any person would, which again I liked, because a normal person in Kristin’s situation wouldn’t be one to “fight the power” and rebel against her enemies. Kristin retreats into herself, and takes a medical leave from school. She works at becoming her old self again, and works at healing from the hurt her friends and her classmates caused. By the end, I was rooting for her as she came to understand her condition and tried to form a “revised” identity. She is unfinished at the end, and even though I did want more of the story, I felt like the ending was perfect. Life isn’t always a happy ending, but one where we learn from our troubles and use those as growth as we move through life. Gregorio’s ending was much like real life and I greatly appreciated it. In fact, when I was done, I sat with the book in my hands to stay the in moment of finishing an incredibly moving book.

Recommendation: Get this touching novel now!

Fun Fact: As I was writing this review, my computer kept auto-correcting intersex to interest. Shows how the concept of a person being intersex is not widely known.