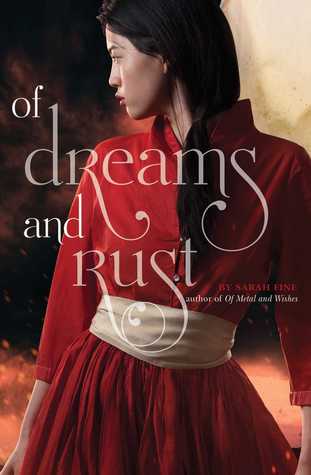 Summary: In the year since the collapse of the slaughterhouse where Wen worked as her father’s medical assistant, she’s held all her secrets close. She works in the clinic at the weapons factory and sneaks away to nurse Bo, once the Ghost, now a boy determined to transform himself into a living machine. Their strange, fragile friendship soothes some of the ache of missing Melik, the strong-willed Noor who walked away from Wen all those months ago—but it can’t quell her fears for him.

Review:  Of Dreams and Rust is the sequel to Of Metal and Wishes — if you haven’t read that, what are you doing here? Go read it first, or check out RIC’s review of it! Okay, moving on…

Of Dreams and Rust is a solid follow-up to its predecessor. At first, the book falls into the classic pitfall of sequels — a slow, drawn-out beginning that introduces the essential plot points of the first book. But, once I got past that, I was drawn into the story to the point that I was a weeping mess by the end.

The plot of Of Metal and Wishes covers the rebellion of the Noor people against their oppressors. The book’s characters occasionally take a backseat in favor of the progression of the plot. Fortunately, the main character Wen’s narration prevents the book from feeling too plot-driven.

As with the first book, Of Dreams and Rust’s strength is its gorgeous language and worldbuilding. While more melancholy than Of Metal and Wishes, the writing in Of Dreams and Rust is a pleasure to read. The worldbuilding and conflict were believable and detailed. Plus, I’m a sucker for steampunk robot spiders and machines. In that regard, the book can do no wrong.

If you enjoyed Of Dreams and Rust, this book is a must-read… and if you’re at all interested in a book inspired by Phantom of the Opera with gorgeous worldbuilding, then Of Dreams and Rust is the book for you, and once you read that, check out the sequel! I thoroughly enjoyed the sequel, and can’t wait to read Sarah Fine’s next book.

Recommendation: Get it soon! This is a wonderful sequel to Of Metal and Wishes.