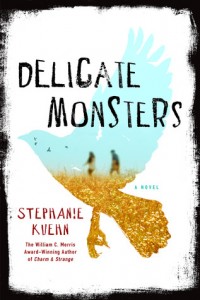 Summary: When nearly killing a classmate gets seventeen-year-old Sadie Su kicked out of her third boarding school in four years, she returns to her family’s California vineyard estate. Here, she’s meant to stay out of trouble. Here, she’s meant to do a lot of things. But it’s hard. She’s bored. And when Sadie’s bored, the only thing she likes is trouble.

Review: In Stephanie Kuehn’s bio at the back of the book, it states that she is earning her doctorate in clinical psychology and having now read her third novel dealing with characters who have deep, deep psychological problems, it’s clear that her hard work is paying off. In a good way. Kuehn doesn’t create characters were mental illness is their “tragic flaw” but as a part of their physiological make-up and as a way that they see the world. Instead of seeing the characters as people to be fascinated by, we instead empathize with them, care for them, want the best for them and when the novel is over, we wonder what type of adults these teens will grow into. Even the characters we might not find so likable, and boy does Kuehn write unlikable characters well.

In Delicate Monsters, Sadie Su is one complicated young lady whose outlook on life is quite horrible (and she does some horrible things).  If she were a real person, I would clearly stay away from her, but as I read, I found myself connecting with her. I actually began to root for her, because I grew to understand her. And I really loved that such an unlikeable character ultimately became the hero in the end. Sadie is character who likes to think she isn’t a caring person, but ultimately her true nature shines through and when she performs an act of true courage, I was both happy and sad for her. Kuehn wrote a character with much depth, but who is also very complicated. I was actually very happy that Kuehn wrote such an unlikeable female character, as they are far and few between in YA literature. Not all girls can be the super special snowflake that have to choose between two guys. Sometimes, girls can be just as devious and cold-hearted as young men. And those girls deserve to be the hero too. Sadie is that type of girl and I loved her for it.

Delicate Monster is told using 3 narratives, that in the hands of a lesser author, would have been confusing. At first, I was wondering how Sadie’s, Emerson’s, & Miles’s stories would intersect as Kuehn slowly builds the story lines together and when then do…oh my. However, there is a lovely bit where Sadie doesn’t realize she’s befriended Emerson’s younger brother, so her relationship with Miles is truly genuine, and is ultimately what leads her to perform her courageous act once she realizes the connection. In that moment, her dislike of someone else leads her to show compassion, and act on that compassion, for another. I truly loved that aspect of this novel. Emerson wasn’t a horrible young man, he just was a victim, so to speak, of when mental illness is brush under the rug and hidden. He truly did not know how to cope with a part of himself that was prone to violence. When he did realize it, however, my heart broke for him. It is these lovely elements of the novel that drew me in and kept me reading. These three young people each called themselves “monsters” because of their behavior and thoughts, but I believe the opposite to be true. Sadie, Emerson, & Miles were struggling teens who did not know how, nor were given the tools to deal with the darkness that resided in them. They were not the monsters; it was the adults who failed to help them. And that is the true tragedy of this heartbreaking novel that stays with you days after you’ve finished it.

Recommendation: Get It Now!!!