A few months back, I came across a graph of the CCBC Multicultural Statistics for 2015. The results were disappointing but unsurprising… 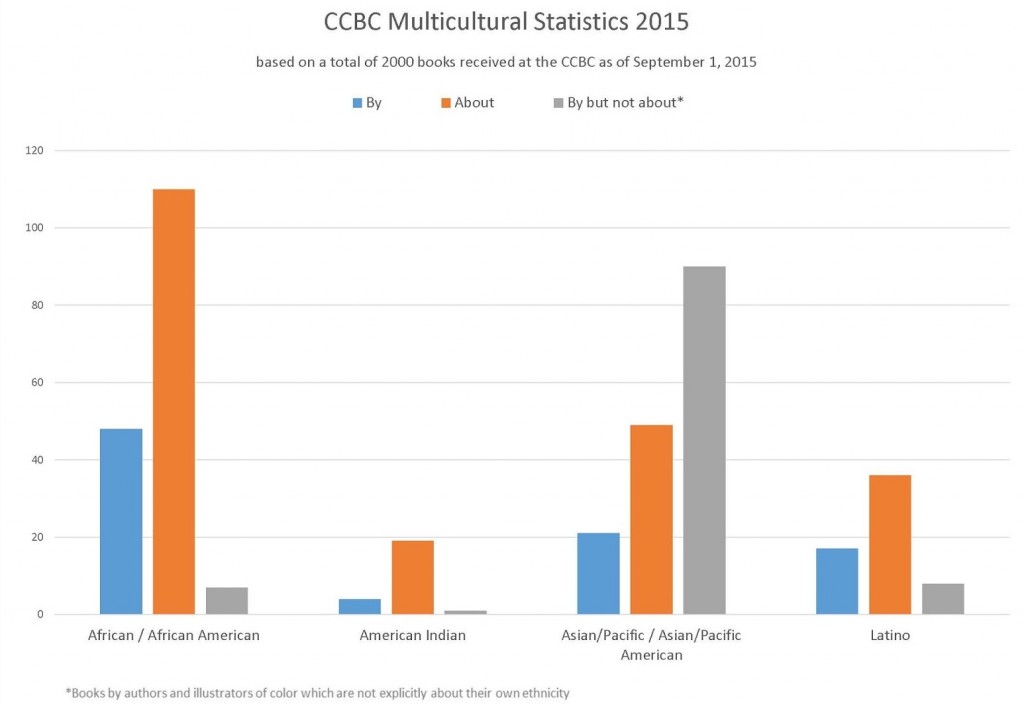 Seeing that graph reminded me of a recent trend in YA lit — Asian fantasy. Or maybe it’s not a trend, and I only feel like it is because I’m Asian myself. Either way, I have mixed feelings about this type of book since it usually ends up being a) all my dreams come true, or b) a racist mess, or c) disappointingly mediocre and most likely written by someone who isn’t Asian. Some of my favorite (yay!) and least favorite (read: racist) books fall into this category.

Honestly, every time I hear about a new “Asian-inspired” YA fantasy, I feel a little shiver of dread. I wonder who’s it by, what’s the plot, and does it involve names pulled from a dictionary?

At any rate, I decided to figure out the ratio of “Asian-inspired” YA sci-fi and fantasy written by Asians and non-Asians (mostly white authors, let’s be real). Using the completely unscientific method of scouring goodreads lists and asking around, I came up with this list*:

Ash by Malinda Lo (2), Half World by Hiromi Goto, Silver Phoenix by Cindy Pon (3), The Wrath and the Dawn by Renee Ahdieh, The Grace of Kings by Ken Liu, Prophecy by Ellen Oh (3), Ash Mistry and the Savage Fortress by Sarwat Chadda (3), Alpha Goddess by Amalie Howard, The Girl from the Well by Rin Chupeco (2)

Asian Sci-fi/Fantasy YA lit by non-Asians (34):

Spirit’s Chosen by Esther Friesner (2),  Stormdancer by Jay Kristoff (3), Soundless by Richelle Mead, Ink by Amanda Sun (3), Gilded by Christina Farley (3), Eon series by Alison Goodman (2), Cinder series by Marissa Meyer (4), The Walled City by Ryan Graudin, City of a Thousand Dolls by Miriam Forster (2), Toads and Diamonds by Heather Tomlinson, Battle Magic by Tamora Pierce, The Night Itself by Zoë Marriott (3), Fox and Phoenix by Beth Bernobich, Of Metal and Wishes by Sarah Fine (2), The Fire Wish by Amber Lough (2), Exquisite Captive by Heather Demetrios (2), A Thousand Nights by E.K. Johnston

*Note: I included SFF YA books involving elements of Asian cultures. I listed one book per author, but included the number of books in a series/standalone books that fit the criteria as well in parentheses. I didn’t count books that were obscure, fairly old, or arguably middle grade.

Well. I swear the perfect 1:2 ratio is a coincidence, but it seems to roughly match up to CCBC’s stats. This brings to mind two issues:

To end on a happy note, here are a few of my favorite books from the two lists above: Half World by Hiromi Goto, Serpentine by Cindy Pon, and Of Metal and Wishes by Sarah Fine. Do you have any favorites?