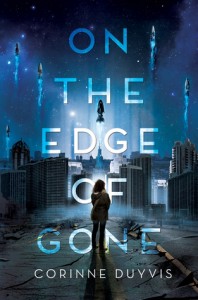 Review: I was talking to a co-worker about The Walking Dead and why he doesn’t watch it, and he remarked that he hates to read/see stories that has our worlds in ruins, that it hurts him, It was in that conversation I realized just why I was so sad about Corinne Duyvis’s new novel. It’s not that the novel was bad (because it wasn’t) or that it wasn’t a page turner (because it was) but what made me so sad was that it was the story of the destruction of our world, and having that knowledge made me really sad. In books like Hunger Games, where the dystopian future is man made, you root for the hero to overcome systematic oppression. In On the Edge of Gone, the disaster is a natural one and our hero, Denise, is just trying to survive in a brand new dangerous world, and that is what made me so sad. Which is, in a sense, a bit ironic because I’ve always wanted a book that dealt with the disaster in the moment, not years later, which I got, but it also broke me.

Let’s look at the first line shall we, “The first time my future vanished was July 19, 2034.”  Talk about a punch to the gut from the start; and the novel never lets up. It opens with Denise’s reaction to the announcement about the comet, and then fast-forwards to the day of, specifically 30 minutes before the comet is supposed to hit. Denise and her mother have not left the house yet, and it will take them about 45 minutes to get to the shelter. Logically, I knew that Iris would survive the blast, however, Duyvis writes Denise so well that I felt her panic, and frustration at her mother’s lack of urgency to get to safety. I wanted to scream at her mother as well. In fact, there were many times I was frustrated with a number of characters, but when your world is ending how rational is one really going to act? When it comes to matters of survival, won’t we often look out for our own?

And that is the main question that Denise faces throughout the book as she tries to get a spot on the generation ship for not just herself, but for her mother and her sister. She struggles with trying to help others survive, yet look out for her family as well. I love that Duyvis explores Denise’s guilt and turmoil over the desire to save her family versus her desire to help others because the inner conflict made the novel very true. Denise is a caring person, evident in her love of cats so much that she works at a animal shelter, but yet is learning how to deal with others in the worst scenario possible. Denise’s world, er everyone’s world, has been shattered and Denise must work a little harder, due to her autism, to adjust to life after the comet.  Denise is fully aware of how she can be perceived (which also hurt when Duyvis didn’t hold back on the micro aggressions Denise faced) yet she makes an active effort to adjust her behavior to be accepted on board the generation ship. Denise uses this opportunity to prove, not only to everyone else, but mainly to herself what she is truly capable of.  And in the end, well, I don’t want to give it away, but Denise does find that her future vanished as she knew it on July 19, 2034, but she got a new one by learning more about herself, and her ability to survive, than she ever thought possible.

P.S. While we here at Rich in Color focus on characters of color, I’m glad that Duyvis wrote a character who, in addition to being bi-racial, is autistic. I’ve had, and currently have autistic students and love that there is a book where they can see themselves reflected in a novel, where they get to be the hero. Many people think there is only one type of way a person with autism interacts with the world (a micro aggression that Duyvis brings into the book) and those of us who work with students who have autism know that they are completely different and unique in how they perceive the world. Denise is a perfect example of the broadness of the autism spectrum and how a person with autism’s mind works.

One Reply to “Book Review: On the Edge of Gone”