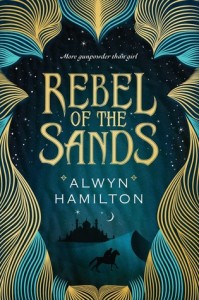 Summary: She’s more gunpowder than girl—and the fate of the desert lies in her hands.

Review: I’m going to admit that when I first read Hamilton’s debut novel, I was so involved with the story that I read it in a day. However, there was something about the novel that didn’t sit right with me and I couldn’t figure out what it was, so I decided to read the novel again. I figured that I read it too quickly and might have missed some parts of the story, hence why I was feeling a bit incomplete. I couldn’t figure out why I had this, “I loved it but…” feeling. I enjoyed the main character, Amani, and her male counterpart, Jin; I enjoyed the adventure the two went on and enjoyed the reveal of Amani’s gift. So, why was I hesitant about this novel?

Then it hit me. I don’t feel like this novel is all that original. Hamilton’s novel hits all the checkmarks of all the current trend in female driven hero’s journey novels (outsider girl – check, desires to live a different life – check, meets handsome rogue stranger – check, leaves in a hurry/goes on the run – check, falls in love, but doesn’t act on it – check, discovers secret power that rogue stranger knew about but she didn’t – check, joins a rebellion – check, survives first fight to live on for sequel – check). The “difference” here is that Amani’s world was inspired by Arabian mythology and culture and the way that Hamilton incorporated the mythology and culture is what bothered me.

One theme that rubbed me the wrong way was Hamilton’s portrayal of Amani’s society’s attitude towards women. In order for Amani to stand out, to be original, the oppression that Amani experienced from her society was a bit over the top. Throughout the story Amani states how Miraji men believe women are lacking in intellect and treat them as nothing but property. This is a real stereotype attributed to Arabian culture and I was bothered by the fact that Hamilton chose to include this stereotype in her novel as a reason for Amani to rebel. I would have like a more compelling reason for Amani’s desire to leave her home instead of relying on a harmful stereotype of a culture.

I believe that Hamilton was really trying to be original with the world of her novel, and I will say that she did an excellent job of world building to make Amani’s world believable. In the story, we learn of more of the outside world other than Miraji and Hamilton creates a unique and interesting mythology with the First Beings and the Destroyer of Worlds. The rules of magic that she created made sense to the story. Her characters are well written and she also passes the Bechdel Test where Amani develops a friendship with another girl and they have conversations that don’t revolve around men. To see her develop a healthy female friendship in a hero’s journey was actually very refreshing.

Recommendation: Overall, I am filled with mixed emotions for “Rebel of the Sands”. There was much that I enjoyed from the novel and some parts of it bothered me. I found that when the story ended, I wasn’t quite ready to leave Amani and Jin and am looking forward to seeing where their next journey takes them.