Now that summer is coming to a close, I’m looking forward to cooler weather and plenty of reasons to stay inside, curled up on my couch or my bed, and reading a book. So here are four books I hope to read this fall. Are any of them on your TBR list? What other books are on your list? Let us know in the comments!

Skybright is plunged into the terrifying Underworld where demons are bred, while Stone, stripped of his immortal status, must find a way to close hell’s breach before more mortals die. Meanwhile, Zhen Ni, Skybright’s former mistress and friend, is now wed to the strange and brutish Master Hou, and she finds herself trapped inside an opulent but empty manor. When she discovers half-eaten corpses beneath the estate, Zhen Ni worries that Master Hou is not all he seems. As Skybright begins the dangerous work of freeing Zhen Ni with the aid of Kai Sen and Stone, nothing can prepare them for an encounter so dark that it threatens to overtake their very beings. 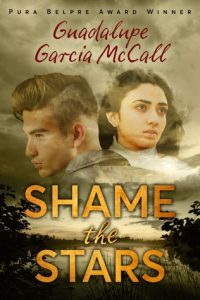 A YA re-imagining of Romeo and Juliet set in 1915 Texas during the height of the Mexican revolution, about Joaquin, a Mexican-American teen trying to protect his family’s ranch and his sweetheart, Dulcena, from the Texas Rangers and their posses.