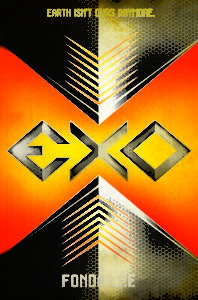 Summary: It’s been a century of peace since Earth became a colony of an alien race with far reaches into the galaxy. Some die-hard extremists still oppose alien rule on Earth, but Donovan Reyes isn’t one of them. His dad holds the prestigious position of Prime Liaison in the collaborationist government, and Donovan’s high social standing along with his exocel (a remarkable alien technology fused to his body) guarantee him a bright future in the security forces. That is, until a routine patrol goes awry and Donovan’s abducted by the human revolutionary group Sapience, determined to end alien control.

Review: It has been a while since I’ve read any science fiction, and Exo reminded me of several of my favorite aspects of the genre: aliens, moral quandaries, and cool technology.

Unlike a lot of my favorite science fiction, the aliens that Fonda Lee has created for Exo are very un-human-like, what with their mushroom-like bodies with six legs, six eyes, fins, and armor. The scattered information we got about the War Era and the conquering of earth—a billion people dead, the reshaping of political boundaries, a new social system—was intriguing. Occasionally, I felt like the world of Exo was too wide for just Donovan’s point of view and wished to see it from inside someone else’s head. Particularly someone from a less privileged life.

Donovan was an engaging character, and it was easy to root for him even when I didn’t think he was making the right choices. Watching him start to question the way of life he was raised in—while simultaneously criticizing opposing views—was a satisfying character arc, though it doesn’t feel complete. (But I suppose that’s what sequels are for.) While I wanted to see more of his life not centered around his job, I have to admit that there were several riveting action scenes because of it. Lee did a great job with her action scenes and in creating the tension- and dread-filled scenes leading up to them.

Perhaps my most significant complaint about Exo is the limited development of several significant side characters, most notably Anya and Donovan’s father. While we were told some formative parts of Anya’s backstory, even Donovan had a throwaway line about how little he really knew her and speculation that his attraction to her was more the result of trauma and loneliness than anything else. Considering the great personal risks he takes for her in the climax, I wish that Anya—and her relationship to Donovan—had been more fleshed out. Similarly, I don’t feel as if we ever got to know Donovan’s father very well on an intimate level, which was a shame, considering how important he was within the story.

I also noticed something that concerned me: the use of Native American imagery. Saul Strong Winter is the name of the Sapience cell leader in the Black Hills, so I presume he is of Native descent, but we are never given a specific tribe or nation for him.

EDIT (2/20/17): I have been informed by the author that she and her editor made changes to the book prior to printing regarding this imagery. While an eagle tattoo still features in the plot, it is no longer a Native American design. They realized that Sapience’s use of a Native American design would be problematic and corrected that for the print version of the book.

Recommendation: Get it soon, if alien conquests in science fiction are your thing. While Exo isn’t without problems, it is a fun, fast read with some interesting world building. I’m looking forward to the next book.

Extras
Interview with Fonda Lee at Rich in Color