We are thrilled today to be able to share an excerpt of A CROWN OF WISHES by Roshani Chokshi with you!

Roshani Chokshi proved herself an author to watch with her young adult fantasy debut last spring, The Star-Touched Queen. Debuting at #4 on the New York Times bestseller list, the novel received rave reviews from fans and critics alike and appeared on the most buzzed about lists of 2016. Chokshi once again writes a beautifully crafted story of adventure, love, and magic set in the Star-Touched world with her sophomore novel A CROWN OF WISHES (St. Martin’s Griffin; 3/28/17). Building on her intricate setting based on ancient India and Greek mythology, her follow-up is a novel spun from enchantment with a strong female heroine and a swoony worthy prince who team up to win back the thrones of their kingdoms.

Reaching the tournament is just the beginning. Once they arrive, danger takes on new shapes: poisonous courtesans and mischievous story birds, a feast of fears and twisted fairy revels. Every which way they turn new trials will test their wit and strength. But what Gauri and Vikram will soon discover is that there’s nothing more dangerous than what they most desire.

If that sounds like a book you want to read, click here to check out the excerpt! 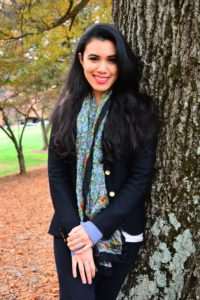 Roshani Chokshi is the New York Times bestselling author of THE STAR-TOUCHED QUEEN. Her work has appeared in Strange Horizons, Shimmer, and Book Smugglers. Her short story, “The Star Maiden,” was longlisted for the British Fantasy Science Award.

One Reply to “EXCERPT: A Crown of Wishes by Roshani Chokshi”