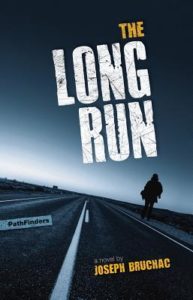 Summary: “You are useless, kid. Useless. Why do I have to take care of you? You just hold me back. Useless.”

Travis put his hand on his stomach. He felt the bruise from his father’s blow, but what his father had said hurt more.

I’m not useless. I can run. That’s one thing I can do.

I can’t stay here, Travis thought. The thought surprised him. But how can I leave my father? Then another thought hit him. It hit him harder than his father’s drunken fists. I have to leave. I have to run. Not tomorrow. Now!

Follow Travis Hawk on a cross-country trek as he escapes a world of brutality and uncertainty and puts his trust, and even his very life, in the hands of total strangers. Travis’s story is one of struggle, survival, risk and resilience, navigating a solo journey of hundreds of miles to seek a safe haven far from the demons of his past.

The Long Run is a straightforward adventure story, focused on Travis Hawk as he makes the fateful decision to leave his father and the Seattle shelter they live in and travel to his grandparents in Maine. It is easy to empathize with Travis and his sudden decision to run away before his father can wake up. His journey is a hard one (anti-Native racism, lack of money, harrowing encounters), but it is also filled with many uplifting moments and good people. From the man on the bus who shares his food with Travis to the people who pay him for odd jobs so he can continue with his journey, there is a wealth of kindness in this story, too.

As Travis crosses the country, the reader learns more about him and his past while also learning about the people who have stepped in to help him. He meets a wide cross-section of humanity, and the people he spends time with all have their own stories to explore. In fact, I wished the novel were a little longer so Travis could meet more people and so we could learn more about him. The episodic nature of the book generally works well, though it feels a little choppy on occasion.

Recommendation: Get it soon, especially if you’re a teacher looking to diversify a middle or high school classroom library. The Long Run would be a great book to pass on to any teens who like adventure stories and also have lower reading levels.

This giveaway is open to U.S. teachers only. Use the Rafflecopter widget below to enter. One copy of The Long Run is available. The giveaway ends on June 16, 2017.
a Rafflecopter giveaway