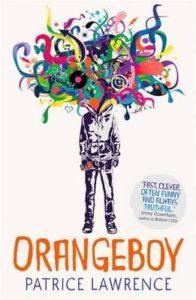 Summary: Sixteen-year-old Marlon has promised his widowed mum that he’ll be good, and nothing like his gang-leader brother Andre. It’s easy when you keep yourself to yourself, listening to your dead dad’s Earth, Wind and Fire albums and watching sci-fi. But everything changes when Marlon’s first date with the beautiful Sonya ends in tragedy; he becomes a hunted man and he has no idea why. With his dad dead and his brother helpless, Marlon has little choice but to enter Andre’s old world of guns, knives and drug runs in order to uncover the truth and protect those close to him. It’s time to fight to be the last man standing.

Review: I first heard of Patrice Lawrence’s award winning book through an article I received in an email. I saw that it was published only in the UK and since I was spending the summer in London, I made the decision to purchase the book. As the US exports more authors than we import, I was excited to read a YA book from a British author of color and to see the subtle differences between American and British culture. I was not disappointed. I had fun being able to have a visual reference to some of the locations mentioned in the book, and reveled in learning the differences in American and British colloquial language. For example, there was a character description that I was initially confused by. Marlon describes a character with “cane row” and at first I thought it was clothing. Then I realized he was describing hair style and when I googled “cane row” pictures of people with what us Americans call “corn row” came up. It’s these subtle differences that make reading a book from outside the US enjoyable and open us readers to new experiences.

The story itself was a bit slow to get started but once the mystery began to slowly reveal itself and Marlon worked to solve it, then the story really got going. Especially because Marlon made so many stupid mistakes – and I say that in the best way. Marlon is a great character because he is so out of his element in trying to solve the mystery of why he and his family is being harassed/threatened/stalked. He is a sweet hearted geeky kid who learned from his brother’s mistakes and made sure to stay out of trouble. Unfortunately trouble found him, but through it all he was adamant about standing up for himself and his family which made me really love him. However, it was also what made me so frustrated by him because he was way over his head and kept making dumb decisions as instead of getting help he chose to figure everything out on his own. I so wanted to scream at him “tell the police!”, but in reality he couldn’t trust the police either because they just saw him as the brother of a former gangster. Marlon truly was in a tough position and did the best he could with the knowledge he had which was very true to life and really made me connect with Marlon. He was the hero of his story but it wasn’t easy and Marlon had more losses than wins, but ultimately learns what he is capable of.

I have an issue with absent parents in YA, so I loved that Marlon’s mom was involved in his life, or rather at least tried to be. Their relationship was very typical mother/son as it was clear that they were close but with that tiny bit of strained because teenagers have the desire to keep things to themselves and are beginning to push boundaries. I also loved that his mom was a clear advocate for her son which showed the love she had for him and why Marlon wanted so badly to protect his mom in return. Even though his father had been dead a number of years, from an illness, us readers were given a sense of the relationship Marlon had with him as well and the loving relationship his parents had. I loved that Marlon was able to remember his parents relationship and how it shaped the person he became. Marlon also had a very strained relationship with his mother’s boyfriend, Jonathan, but it was clear that Jonathan was trying to help be a parent with Marlon’s mom, but also knew his boundaries. The parent/child dynamics that Lawrence wrote was very real and true to the novel.

Overall I really enjoyed Orangeboy and I want to read other books by Lawrence now (she actually has a new one out!). Additionally, I want to read books by other authors of color from across the pond, so if you know of any please share in the comments below.

Recommendation: Get It Now. FYI… Americans can order books from Amazon UK, yay!