Once in a while we share reviews of books that are not strictly young adult. This is one of those times. One Shadow on the Wall is marketed as middle grade, but it is an excellent story for any age. This review was previously published on my personal blog Reading Through Life. 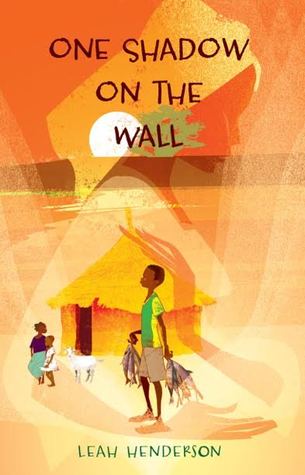 Summary: An orphaned boy in contemporary Senegal must decide between doing what is right and what is easy as he struggles to keep a promise he made to his dying father.

Eleven-year-old Mor was used to hearing his father’s voice, even if no one else could since his father’s death. It was comforting. It was also a reminder that Mor had made a promise to his father before he passed: keep your sisters safe. Keep the family together. But almost as soon as they are orphaned, that promise seems impossible to keep. With an aunt from the big city ready to separate him and his sisters as soon as she arrives, and a gang of boys from a nearby village wanting everything he has—including his spirit—Mor is tested in ways he never imagined.

With only the hot summer months to prove himself, Mor must face a choice. Does he listen to his father and keep his heart true, but risk breaking his promise through failure? Or is it easier to just join the Danka Boys, whom in all their maliciousness are at least loyal to their own?

Review: Mor and his family completely stole my heart. Mor hears his father and sees his mother after they have died. He knows his parents would want the children to stay together so he’s determined to do that at any cost. He tries. Oh, how he tries, but the responsibilities are tough. He learns so many things the hard way. Something will go right and then two things will go wrong. It is hard to see him face so many disappointments, but readers will be cheering him on all the way through.

The gang is on his trail and brings about many of Mor’s difficulties. They also offer safety and protection though. Henderson does a particularly good job of showing how children and teens can get caught up in such a situation. The gang members are individuals and have stories. They have their reasons for having joined and readers see that gang activity may not be as clear-cut as one would imagine. I think there are gang members who never believed they would have anything to do with a gang and yet there they are.

It may not look like it on the surface, but this is a survival story. Mor has a loving community, but he does isolate himself with the secrets he is holding. There are many strong and caring adults that help Mor and his sisters. I appreciated seeing the way they looked out for the children. One in particular is an elder fisherman named Demba. Many of the children make fun of him and believe he is crazy. Mor spends a lot of time with Demba and learns that Demba’s differences are not what they appear.

Recommendation: This is a fabulous book that may cause a little heartache, but it’s also heartwarming. Mor’s persistence and hope are lovely to behold. It’s a little long for a middle grade novel, but it moves quickly and is well worth the time.