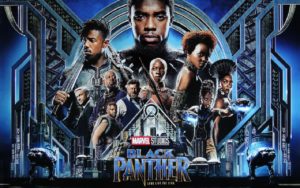 Marvel’s Black Panther was a highly anticipated movie and since it was released a little over a month ago has broke all sorts of box office records. Of course all of us saw the movie (some of us more than once) and like many others, we had to share our thoughts with each other. Check out our thoughts of Black Panther below. #WakandaForever

K. Imani: Favorite character? I know I’m struggling with choosing one because this beautiful ensemble cast just worked well with each other. All had their awesome moments and their strengths balanced each other out. But, if I had to choose I’d have to go with Shuri. I loved her smarts, I loved her enthusiasm, and I loved her relationship with her brother. She was just so cute and had one of the best lines in the film. My 10 year old niece loved her, so I’m hoping that young Black girls like my little niece can see how amazingly smart Shuri is and think about going into STEM fields.

Jessica: Who doesn’t love Shuri? But just to mix things up a little, I’m going to say Okoye. She delivers some of the funniest and badass lines of the movie. I mean, her introduction is her snarking on T’Challa for freezing in a fight. Her loyalty to Wakanda is clear-eyed and courageous, which I love. I’d want her on my side in any fight.

Crystal: I totally adored Shuri. She’s brilliant and hilarious. She is also someone who loves strongly and lifts others up. She’s an encourager, but also pokes at people too. They know she’s got their back, but she’s also cozy enough with people to tease them a bit. It’s hard to choose just one though. There were so many amazing characters.

Audrey: Definitely Shuri (for all the reasons you guys mentioned), but I also really loved Nakia. I was thrilled that her introduction was about saving other women (and a child soldier) because  I always love it in fiction when women get to rescue other women. (More of this, please!) She also was keenly aware of the fact that even though Wakanda had survived and prospered, there were so many others who hadn’t, and she wanted to use her privilege (and Wakanda’s) to help others.

Jessica: I think a lot of people online have made this observation already — Erik/Killmonger’s motives were legit, but Nakia truly had it all figured out. She set the tone for the movie and T’Challa’s growth. Like, T’Challa, pro-tip for life: Always listen to Nakia.

K. Imani: Glad that you should bring up Killmonger, Jessica because the question is #TeamKillmonger or no? Because he’s such a complicated antagonist. I can’t really call him a villain because I empathize with him so much. His comment to the museum worker that all those artifacts were stolen was so on point. I also like that he challenged T’Challa on Wakanda’s isolation and the fact that they have the power to help out the oppressed around the world. His methods, however, not so much. Also, his last line was a total stab to the heart for me.

K. Imani: To me this felt like the first feminist movie from Marvel. All the women in this movie had agency and we saw all of them using their strengths in different ways. They were fierce and feminine at the same time, and T’Challa really depended upon all of them. He listened to what they had to say and treated them as equals. Not to cross streams, but I felt Black Panther did a better job of being a feminist film than Wonder Woman because all the women owned their power and it didn’t come from the love from a man. What do you all think?

Jessica: I haven’t watched Wonder Woman (eep!), but I love how present, varied, and interesting all the women were in Black Panther. You’ve got Shuri, the meme-savvy, tech-savvy younger sister. Nakia, an activist, warrior, and hero in her own right who knows better than T’Challa what the future of Wakanda is. And then you have Okoye, who portrays strength and tradition, and isn’t afraid to take some know-it-all white guy down a peg. Plus, you can’t forget the regal and awesome Queen Ramonda. And I think it’s pretty safe to say that T’Challa is the great hero that he is because he spends time with all these incredible women who lead the way.

Crystal: I agree. The women were powerful and varied. The men were there, but they couldn’t have accomplished anything without the women at their sides. There were so many different women involved too. The power came from the panther goddess to begin with and of course there were the women warriors (Dora Milaje), but there was also Shuri, Nakia and even an elder tribe leader. These women had power and they were not afraid to use it.

Audrey: As much as I loved Wonder Woman, I am incredibly tired of the “one elite woman on a team of men” trope, even if she is the most powerful of all the men by far. There simply wasn’t enough time in that movie to give the Amazons any meaningful depth because Diana left the island so quickly and then got swallowed up by the World of Men (and 95% Men All The Time).

In contrast, Black Panther was populated with so many women with significant screen time that they weren’t reduced just to The One Woman on the Team. They held different and respected roles, had individual personalities and strengths, and made significant contributions to the plot in different ways.

Audrey: One of the other things I loved about the film was the costume design by Ruth E. Carter.So much thought and detail went into it, that even though I know very little about the traditional clothing the designs were based on, it was obvious to me that there were distinct tribes in Wakanda. And! The Dora Milaje wore armor that actually looked like it could function as armor. (And is gorgeous to boot.) What worldbuilding elements were your favorite?

Jessica: It’s so hard to choose. I’ll go with all the advanced tech integrated into society. That moment when whatever-his-face woke up after being patched up and wanders over to the window to see all of Wakanda in its high-tech, futuristic glory was pretty cool, visually speaking. Speaking of Wakanda being this incredible society — and now I’m going off on a tangent — but I do wonder about what Wakanda does about crime and punishment. Erik’s final line was so, so important and profound. But I did wonder if things could have been different. I like to imagine that Wakanda has managed to abolish prison/incarceration.

K. Imani: Oh the world-building! Aside for the storytelling, I think that might be what I love most about the movie. It was clear that BP team did their homework in their integration of the different tribes into creating Wakanda. I loved seeing how the diversity of Africa was represented in the tribes of Wakanda and how it truly felt like what an African country that wasn’t touched by colonialism would look like. For me, seeing African culture celebrated on screen made my heart explode with pride.

That’s just some of what we’ve had to say. What about you? Share your thoughts on Black Panther in the comments below.