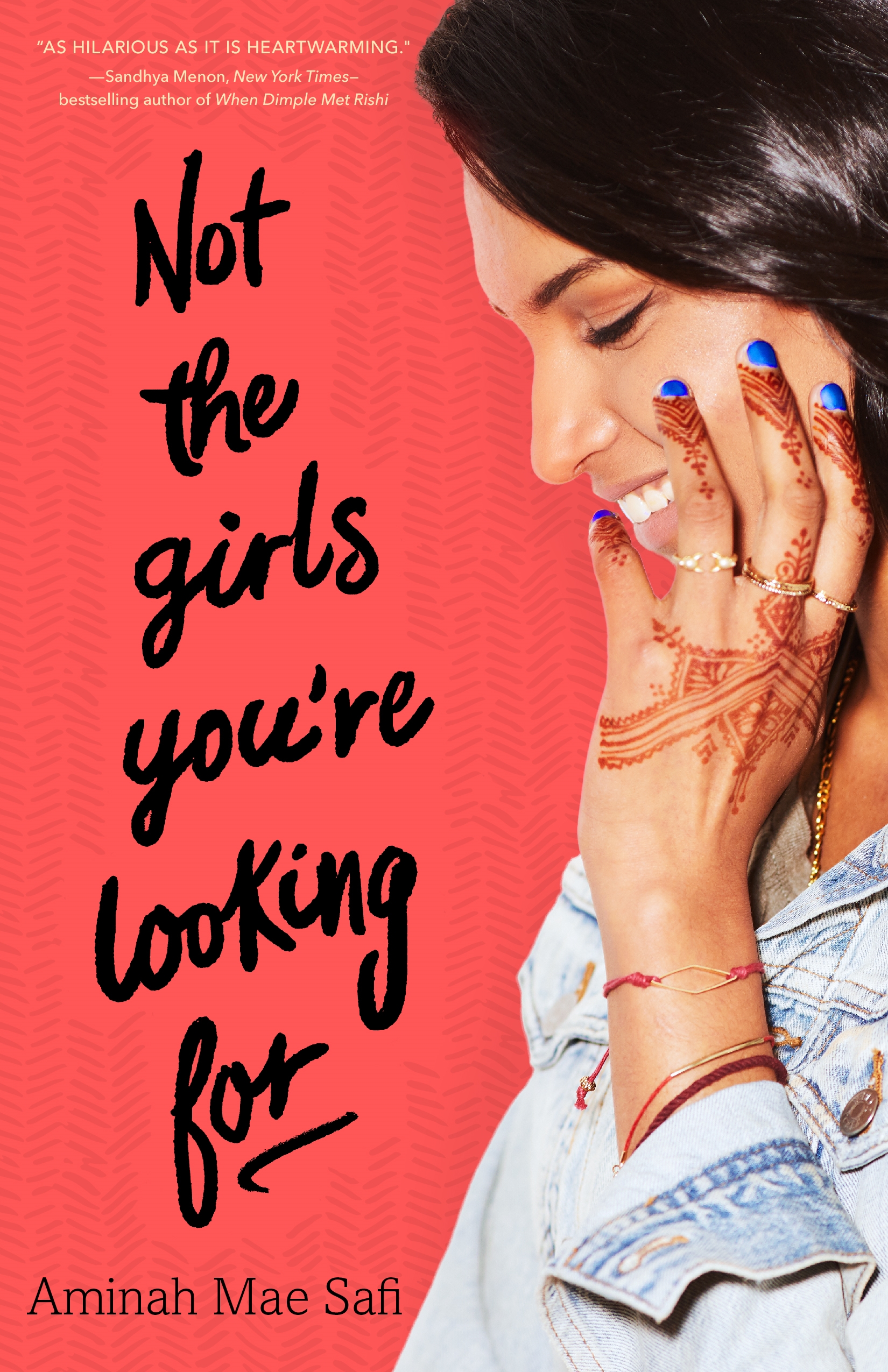 Today we welcome Aminah Mae Safi to Rich in Color. Her debut novel Not the Girls You’re Looking For is out today and we’re excited to find out more about it.

Summary: Lulu Saad doesn’t need your advice, thank you very much. She’s got her three best friends and nothing can stop her from conquering the known world. Sure, for half a minute she thought she’d nearly drowned a cute guy at a party, but he was totally faking it. And fine, yes, she caused a scene during Ramadan. It’s all under control. Ish.

Debut author Aminah Mae Safi’s honest and smart novel is about how easy it can be to hurt those around you even if —especially if—you love them.

CB: What would you have thought about seeing Lulu on the page when you were a teen?

AMS: Relieved, I think. I wrote Lulu because she didn’t exist and I kept looking for her. I couldn’t find her and I finally realized that nobody was going to write her but me. A mixed race Muslim girl who was neither ideally Muslim nor ideally assimilated into Anglo-American culture. She didn’t slot neatly into anyone’s ideas of who she should be.

I think I was, as a teenager, waiting for someone to tell me that I was not alone in this feeling. To tell me that It was okay, that I was okay, that it would be okay. And when I first wrote Lulu, I thought about her as my attempt to give that mirror to others. To provide them with a way to see themselves, even if I didn’t get much of a mirror myself while growing up.

But also, in writing her, I did give myself that same mirror. I wrote a character that let me really explore what it was to be of mixed race, mixed religion, and mixed heritage. To live in a world where culture is not one single thing. I didn’t realize until after the book had sold that— even as the author of Not the Girls You’re Looking For— some old childhood wounds could be healed by knowing that there is a space on the bookshelves for Lulu.

CB: I love that we can see the many imperfections of the characters in your story. It made everyone seem so real. What did it feel like to watch them stumbling about as you were writing?

AMS: Oh man, tough. Especially during editing. There’s something about drafting that I can kind of get into the character’s head and understand why they’re doing what they’re doing. But I have a very different eye when I approach editing and there were some chapters that I thought, “how many times do I have to watch you screw up in this magnificent capacity?”

But, if you want young women to have the ability to save themselves, you’ve got to let them make their own messes.

Giving Lulu and her friends the space to screw up is really the core of the whole book. I had to let them all find their way. Lulu has to recover from her own mistakes. Growing up is, essentially, learning how to make amends and move beyond your worst moments. I truly want girls to know that they can save themselves, so they, unlike me, don’t wait around for someone else to write the stories that resonate with them.

CB: At least initially, Lulu seems to believe that being part of two cultures makes her not truly belong in either space. Did you also grow up navigating between multiple cultures as a teen? If so, have you always seen it as a positive to be able to be identify with two cultural spaces or did you ever feel that it puts a person at a disadvantage in both spaces?

AMS: I did! In fact, my Mom’s father immigrated from Mexico and her mother is German Texan back to the early nineteenth century. So I grew up with even more cultural spaces than Lulu did. Since my mother had grown up in the time of assimilation, I had been taught that being proud of your immigrant culture was an important part of knowing who you are and where you came from. I think my mother always regretted that the choice had been taken away from her.

Where I did struggle was the idea that I was only allowed to be one piece of myself. I think partly because it was the Bush years, there was this sense that you had to pick. You’re either Muslim or you’re American. You’re either a sixth generation Texan or you’re the child of an immigrant. Battle lines drawn in the sand, as though each side were in direct conflict one another.

I didn’t want to have to choose. I wanted to be able to honor all the pieces of myself. I was proud of all the rich heritage that I had been given from all of my family. Though, how I saw myself definitely made people uncomfortable. And sometimes, I did feel like I wasn’t enough for any cultural space.

But ultimately, it’s an asset because I understand that there is no single way to live and move through this world. I see that humans have always been interconnected and as global as we possibly can be. That the human urge for connection and understanding is as strong, if not stronger, than the urge for conquest and domination. I don’t think I’d have such a rich sense of nuance without having been raised in such a multicultural family.

CB: What has your writing journey been like with this first published novel? What have been some of the joys and challenges?

AMS: Slow— until it was fast. I started this book in grad school, in the spring of 2011. It will be seven years and change by the time Not the Girls You’re Looking For comes out, which is bananas if you think about it. But after I did #DVpit in 2016, I signed with my agent Lauren MacLeod in August of 2016, and then the book sold that October, just three weeks after we went on submission with the manuscript.

It’s always difficult, to believe in your work when there is no sign that you’re going to get it out into the world. You’re gambling on a future that may never come. So when it does arrive, it’s rewarding not just because you bet and you were right. But because you bet on yourself and you saw it through. It builds this way of grounding into yourself that’s beyond ego or even self-confidence.

CB: What books have shaped you as a person and as a writer?

AMS: I always say Jane Austen. Her books just get better on re-reads. To me, they’re a map of how I grew up. I can see the snapshots of myself at the various ages that I read her work— eleven, sixteen, twenty, twenty-three, twenty-six, etc. They’re just the kind of books that you’re constantly noticing different aspects of the story, different aspects of the writing. There’s something about books that change and grow as the reader changes and grows that is just so formidable.

She’s also a writer whose work you can do close readings of, but, at the same time, just read for the sheer joy of the plot. You don’t have to dive deep every time you read her work, but you can dive into the language anytime you’d like. Her work is layered, and ultimately, I love books that do not fit neatly into my mind or my worldview.

I’m in constant awe of Melina Marchetta. She writes contemporary, magic realism, crime, and high fantasy. She writes the most amazing, difficult, messy young women. She doesn’t shy away from the ugly sides of life, but she doesn’t write after-school special style issue books either. She just captures life and humanity in this way that I find to be so masterful. The women in her Lumatere Chronicles books make me weep— and not just from sadness, but from joy and pride and sheer amazement.

Dodi Smith’s I Capture the Castle was a book that found me in later adolescence, just after I graduated from college. It was one of those books that arrived at exactly when I needed it and it will always have a place in my heart for getting me through the year of uncertainty that ensued from graduation.

Zora Neal Hurston’s Their Eyes Were Watching God was one of those books that I didn’t want to love, but as soon as I read it, I just let it into the deepest recesses of my heart. Hurston taught me that words can help you access those big, terrifying things that are actually beyond words. That taking your time to get to the heart of a problem can make for a more satisfying tale.

CB: Thank you so much for sharing with us today!