Today we welcome Patrick Flores-Scott to the blog. He was kind enough to answer a few questions about his writing life and his newest novel, American Road Trip, which is making it’s way out into the world today. I loved American Road Trip and reviewed it here last week.

Summary: A heartwrenching YA coming of age story about three siblings on a road trip in search of healing.

Have you had any memorable and/or life-changing road trips?

Definitely memorable. My parents drove us—me and my sisters—from our Seattle area home to Wisconsin for a reunion when we were all teenagers. Three hormonal teens squished in the back seat of a Ford Fairmont. Middle of Summer. Vinyl seats. No air conditioning. Two out of the three—mortal enemies. Seventeen hundred torturous miles. We camped the whole way. I definitely drew on that trip as I wrote the book.

I’ve actually been through all of the towns and most of the freeways and highways from American Road Trip. I taught in Los Angeles and would drive home to Seattle for the summer. And I also drove from L.A. to visit my sister and her family in El Paso, Texas a couple times.

I’d have to say that most of my road trips up and down the coast (including a trip to the Rose Bowl with friends in college) were as fast or faster than the trip in the book. It was always about getting there. I still feel that pace and those freeways in my bones. Although those experiences ended up being great for the writing, I’d love to do a slow, touristy version of a trip down the west coast with my wife and kids some day.

American Road Trip delves into the issues facing a family who is welcoming someone back after military service. Is this a situation you were familiar with or did it require a lot of research?

There are no vets in my family. I was inspired to start writing this story in 2009, after the housing bubble burst and the economy collapsed. I’m a big NPR listener and at that time there seemed to be so many stories about vets returning from Afghanistan and Iraq. Most of the stories focused on the difficulties of adjusting to civilian life and the tragedy of vet suicide and the treatment vets were receiving at the VA.

There was one story that really launched me into the book. It featured a mom reading a gut-wrenching letter her son wrote to her and his dad before he took his own life. I started researching and listening to all the stories I could. Early on I also was moved by this short movie, Poster Girl. It showed a young vet suffering from PTSD. The thing that got to me—besides watching her battle against the overwhelming demons that followed her back from war—was her support network. This small group of older vets took her in. They counseled her and accompanied her to VA appointments and really seemed to be keeping her alive. Those real-life vets inspired Tio Ed and “The Group” in American Road Trip.

There was a lot of digging through stories online and websites where vets would share their stories, often in search of support and camaraderie. Same with websites for families attempting to find resources to help them cope. I talked to vets and family members and with some folks who work at the VA. My father-in-law is a psychiatrist who has had a lot of experience working with vets so he was a big help as well. I worked on the book for a long time, but there were changes made, even at the last minute, because of feedback I received regarding vets and their care. It was important for me to get that aspect of the story right.

The portion of the experience Manny’s family went through when he came back from war that I connect to personally, is that of being a kid experiencing a family member dealing with mental illness. I feel that in my gut. Also, even though no one dies in the book, the threat of loss hangs over the story like a dark cloud. Much of the time I was writing the book, I was dealing with grief brought on by loss in my family.  So a lot of very real, very strong emotion collided with—and became entwined with—all the new information I was taking in about vets and their families.

I also brought to the writing a profound belief that sending a person to war—whether they go willingly, or not—is the biggest sacrifice you could ask an individual to make, and sending a loved one off to war is the biggest sacrifice you could ask a family to make. So as long as we’re a country that chooses to send people to war, we owe it to them and to our whole society, to meet them with an overwhelming amount of easily accessible care, from the time they return home, for as long as they require it.

I love that you focus on sibling relationships and even go way beyond the nuclear family. How did so many family members become part of this story?

Teodoro is the protagonist. But for some reason, from the very beginning I envisioned Xochitl, the sister, being the person who activates the road trip. She was always the one who believed that Manny—who returned from war unmoored and adrift—could find his bearings via a reconnection to long-lost family. That’s no cure for PTSD, but in the story those re-connections do lead to support that is meaningful for everyone.

Also, at one point, the book was going to be, in part, about the role repeated stories and lore play in unifying families. I made up Avila family stories and wrote them in this heightened style, my attempt at magical realism, and I spread them throughout the novel. Each time I wrote one, it seemed to expand the world of the Avila family. When it became clear that the stories were just too much and I had to nix them, some of the characters from those stories found their way back into the novel. Even some of the stories found their way back in, but in a style that fit the rest of the book.

Xochitl was a new name for me, but I was happy to find someone online who made a video about her name. It is really beautiful in both sound and meaning. Do you know someone named Xochitl or was this just a random pick related to the family history and culture?

I had a student named Xochitl and I really loved that name. My wife, Emma, picked Xochitl for her confirmation name. You’re supposed to pick a Catholic saint’s name, but she went with Aztec instead. (I think it’s so cool that she did that.) It means ‘flower,’ which is sweet, but the written name looks so strong on the page. I wanted to Xochitl, the character to be STRONG. She needed a name that looked and sounded strong. You say, SOE-cheel. A teacher friend told me she had a student who gave up trying to get folks to pronounce it correctly, so she told everyone, “I am so chill.” Doesn’t quite have the same umph.

The book used to start with Xochitl coercing the guys into the car for the road trip and T describing his sister’s name, telling the reader the pronunciation and saying how that name that starts with an X looks as crazy as his sister is. It was fun writing but eventually it didn’t fit and I’m fine making the reader do a little work to find out how it’s pronounced.

Since writing the book, I came to learn that there is a singer-songwriter, Xochitl, out of Sacramento. She is great. Check her out on Youtube. And Xochitl Torres-Small is now running for Congress in New Mexico. Send her your support, people!

Xochitls are coming on strong. Very soon everyone will know exactly how to pronounce that name.

Change can be a challenge at any time in life even when it doesn’t involve trauma. You’ve made a geographical move and a switch in careers recently. What have you learned about yourself through these shifts?

Wow. It’s been four years since I quit teaching and we moved to Ann Arbor for my wife’s job at the University of Michigan, and I’m still learning. I’ve learned that I need to get out and be social. I have a great and loving little family. But I need to reach out more often to the many people who have opened their arms to us since our move to Ann Arbor. I’ve learned that being a writer and stay-at-home dad seemed to really work for me when my youngest son was in preschool half day. Now that he’s in Kindergarten, it’s a long day and I get stir crazy and I’m feeling like I need to get back to a half day teaching job—mostly for social reasons (but also for added income until this writing thing takes off). I’ve learned that I really need a network of writing friends—and I’m SO LUCKY to have eventually found them here. Don’t tell the whole world, but Ann Arbor is a phenomenal town for connecting with writers.

Do you have a special connection to amazing green chile cheeseburgers?

My wife is from Las Cruces, New Mexico. We go down there with our boys twice a year. About ten years ago, my in-laws took my wife and me to the town of Hatch, and to Sparky’s restaurant, the barbecue and burgers place I write about in the book. That first Sparky’s cheeseburger is what started my addiction to green chile, and specifically, to green chile cheeseburgers. I recommend that everyone travel to New Mexico and eat their way through that state. Enchiladas, gorditas, green chile stew. The use of local chile, green and red, makes it a unique and transcendent regional dining experience. My mouth is watering as I write this. If anything, I undersold the glory of New Mexican green chile—and New Mexican cuisine—in the book. It’s amazing, but you have to go there to experience the real thing. 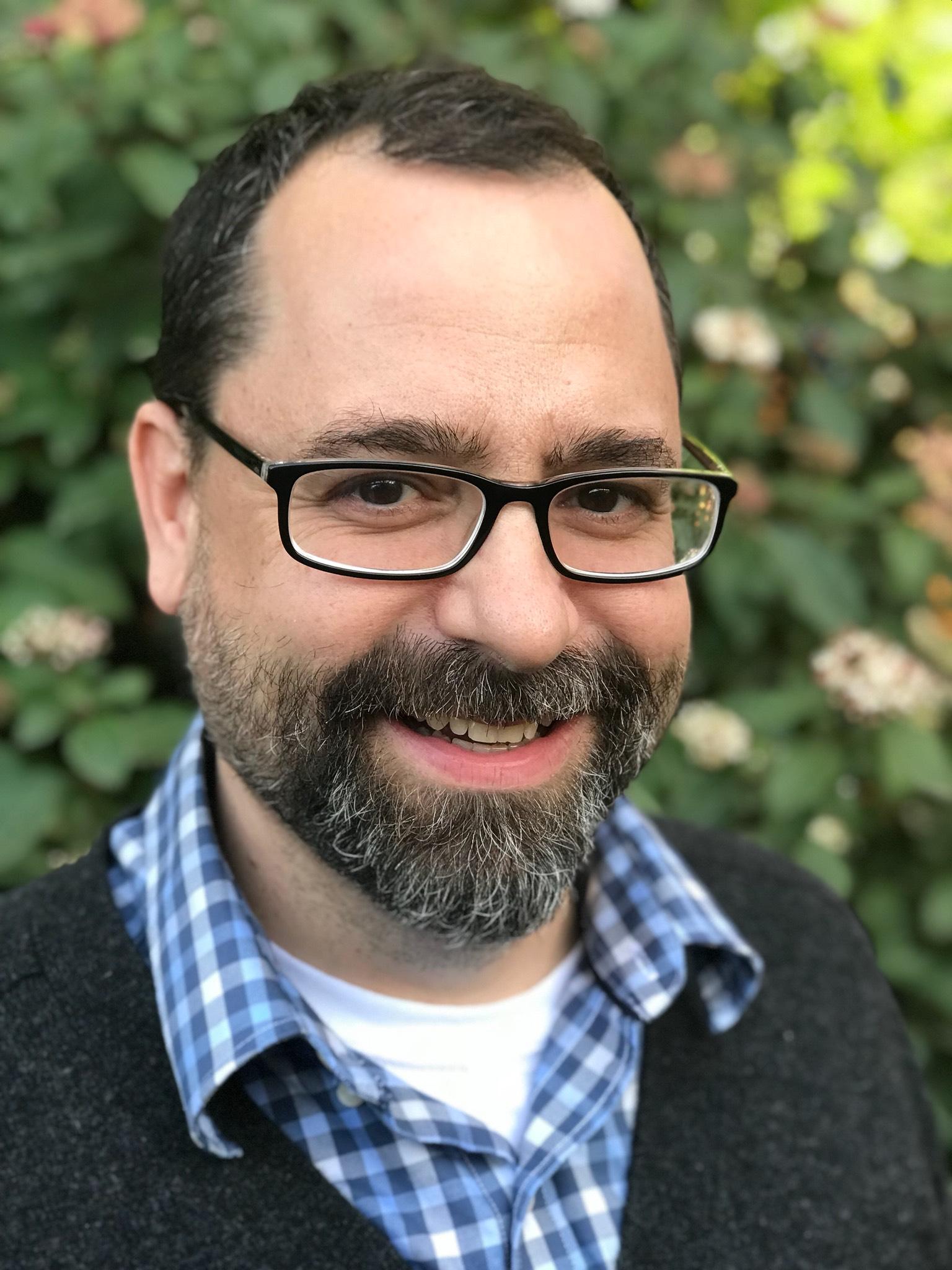 To learn more about Patrick Flores-Scott and his books, visit his website or find him on Twitter @pfloresscott.