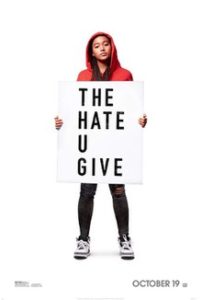 The movie adaptation of The Hate U Give opens in a matter of hours and I know all of you are excited to see it. Unless you’re like me and live in an area where it has been showing since Oct. 5th and you ran to the theater to see it opening day. That is exactly what I did for my students since we are currently reading the book. My school spoiled my students as we were able to rent out a theater just for them to see the movie. We all loved the film. We all laughed, cried, and cheered all throughout the movie. After the movie ended, my students, without any prompting from me at all, gathered together to share their thoughts on the movie. Many of them still had tears in their eyes, others were hugging each other (and their teachers), but many came up to me to thank me for the experience but mostly to say they really felt seen in a movie. That’s why this movie is so important.

The movie version of The Hate U Give is actually quite different from the novel but the themes, the meaning, the parts that really get into your heart are all there. I personally don’t feel like the changes distracted from the overall narrative, and in fact, made the story more intense. Some of the humor from the novel really comes across in the movie, especially the teasing between Starr, Seven and Sekani (which ultimately also translates into a healthy, loving sibling relationship). All the acting in the movie is on point, but I have to say that for me, Russell Hornsby’s performance stands out. That man better be nominated, and win, an Oscar for his portrayal of Starr’s dad Maverick. There were so many moments in the film where he didn’t speak a line, but his eyes said a thousand words. Hornsby’s Maverick is the perfect blend of tough, but loving Black dad who would do anything for his kids.  Amandla Stenberg continues to bring fire to her roles and I feel like she embodied Starr. She had Starr’s spark, her thoughtfulness, and her quiet (if you read the book, you know what this means). She was vulnerable and really raw at times on the screen which made her performance and the story more powerful.

Like I said, the changes made in this adaptation didn’t distract from the overall story. It was clear that Audrey Wells wanted to stay as close as possible to the original novel as I recognized a number of lines from the book. The dialogue was just as snappy in the movie as it was in the book. She also included Angie Thomas’s hilarious twitter discussion about Mac n Cheese for a while back. To top it off, there is an amazing addition to a discussion between Starr and Uncle Carlos, that combined with George Tillman Jr.’s direction that is intense. In fact, George Tillman aught to be nominated, and win, an Oscar for this film as well. The pacing made the story really move and many of his cinematic decisions really brought in the audience to the film. His direction, Wells’s writing, and all the performances is what really makes this a great adaptation of an already great movie.

If you really loved Angie Thomas’s best selling novel, then you need to get to the theater this weekend and see the movie. Let Hollywood know that YA adaptations such as this need to be made and stories like The Hate U Give need to be told.

One Reply to “The Hate U Give Movie Review”