We’re happy to have Sandhya Menon with us today to answer a few questions about her writing life and her newest book There’s Something About Sweetie. [Crystal’s Review]

From the Press Release: The irresistible companion novel to the New York Times bestseller When Dimple Met Rishi, There’s Something About Sweetie (Simon Pulse) by Sandhya Menon follows Rishi’s brother, Ashish, and a confident, self-proclaimed fat athlete named Sweetie as they both discover what love means to them. With the intersectional body-positivity of Dumplin’ and the emotional heartstrings of To All The Boys I’ve Loved Before, this swoon-worthy rom-com celebrates Indian culture and the power of falling for someone who likes you for you.

Ashish Patel didn’t know love could be so…sucky. After being dumped by his ex-girlfriend, his mojo goes AWOL. Even worse, his parents are annoyingly, smugly confident they could find him a better match. So, in a moment of weakness, Ash challenges them to set him up. The Patels insist that Ashish date an Indian-American girl—under contract. Per subclause 1(a), he’ll be taking his date on “fun” excursions like visiting the Hindu temple and his eccentric Gita Auntie. Kill him now. How is this ever going to work?

Sweetie Nair is many things: a formidable track athlete who can outrun most people in California, a loyal friend, a shower-singing champion. Oh, and she’s also fat. To Sweetie’s traditional parents, this last detail is the kiss of death. Sweetie loves her parents, but she’s so tired of being told she’s lacking because she’s fat. She decides it’s time to kick off the Sassy Sweetie Project, where she’ll show the world (and herself) what she’s really made of.

Ashish and Sweetie both have something to prove. But with each date they realize there’s an unexpected magic growing between them. Can they find their true selves without losing each other?

There’s Something About Sweetie is a laugh-out-loud funny coming-of-age novel full of warmth with a will-they-won’t-they romance that will keep readers on the edge of their seats.

The cover of There’s Something About Sweetie overflows with joy and makes me smile every time I see it. What was your response when you first saw Sweetie and what have you been hearing from readers about the cover image?

I’d already had the honor of picking the specific model for the cover, so I knew it was going to be adorable! However, actually seeing the finished product was such a brilliant experience. I remember bursting into the biggest smile when I saw her radiant smile!

Readers of every background are really connecting with Sweetie’s picture. I’ve had so many other self-proclaimed fat readers tell me her double chin gives them life! It’s a rare occasion for most people to see such an unapologetically beautiful, happy fat model on a book cover.

Can you tell us a little about the Sassy Sweetie Project and if you ever thought up such a project for yourself?

The Sassy Sweetie Project is something Sweetie comes up with to show the world the confident, kickass girl she is! She already knows she’s beautiful and perfect the way she is, but she’s very aware that the world around her doesn’t think she deserves to be happy. The Sassy Sweetie Project is her way of owning that happiness, of refusing to let other people dictate what a “happily ever after” should look like.

I personally am a huge fan of “fake it till you make it” in situations I find disconcerting or intimidating, but I’ve never launched something as official as a Sassy Sandhya Project! Maybe I should…hmm…

What has it meant to you to see more and more books out in the world about girls like Sweetie, Dimple, and Twinkle?

The diversity in publishing, especially children’s publishing, is so wonderful! I love seeing such a wide variety of main characters, and that children of every identity out can see themselves in a story. I also feel incredibly lucky to be publishing with a house that welcomes my stories and pushes them so hard.

When did you catch the writing bug and when did you feel like this was something you wanted to do for a career?

I’ve been writing since I was very young, probably around kindergarten or first grade! I only began seriously pursuing publishing in my late twenties. When Dimple Met Rishi, my first book, came out when I was 33, so I was a late bloomer in that regard.

I see that you have a series in the works. Can you share a little bit about that yet or is it top secret?

Thanks for asking; I’m so excited about my contemporary fairy tale-retelling series! The first book, Of Curses and Kisses, comes out in February 2020. Of Curses and Kisses has modern-day royals, an elite boarding school, and a sprinkling of Beauty and the Beast! The story follows an Indian princess, Jaya Rao, who enrolls at St. Rosetta’s Academy just outside of Aspen, Colorado, to con a misanthropic British aristocrat named Grey Emerson into falling in love with her so she can break his heart. The Raos and the Emersons have been feuding for a long time, and Jaya wants to exact revenge for all the wrongs the Emersons have committed against her family. There’s no outright magic in Of Curses and Kisses, but you’ll be left wondering what, if anything, an ancient curse has to do with a rose-shaped ruby pendant…

Have Bollywood movies influenced your writing in any way?

I grew up watching Bollywood movies, which is why I think I’m so partial to happily-ever-afters!

As of May you’re officially a “mid-career author” with three published books, so it’s likely you’ve had many interesting experiences. What has been your strangest or most humorous publishing related moment?

Gosh, so many! One of my favorites is the time an older Indian mom attended my signing and tried to get me to go out with her son. I told her I was married with kids, and she said that was okay with her. *jaw drop*

Thanks so much for sharing love and laughter with the world through your books. Thanks also for taking the time to answer questions for us. We look forward to reading more of your writing over the years.

Thanks so much for having me, and for all the great work you do! 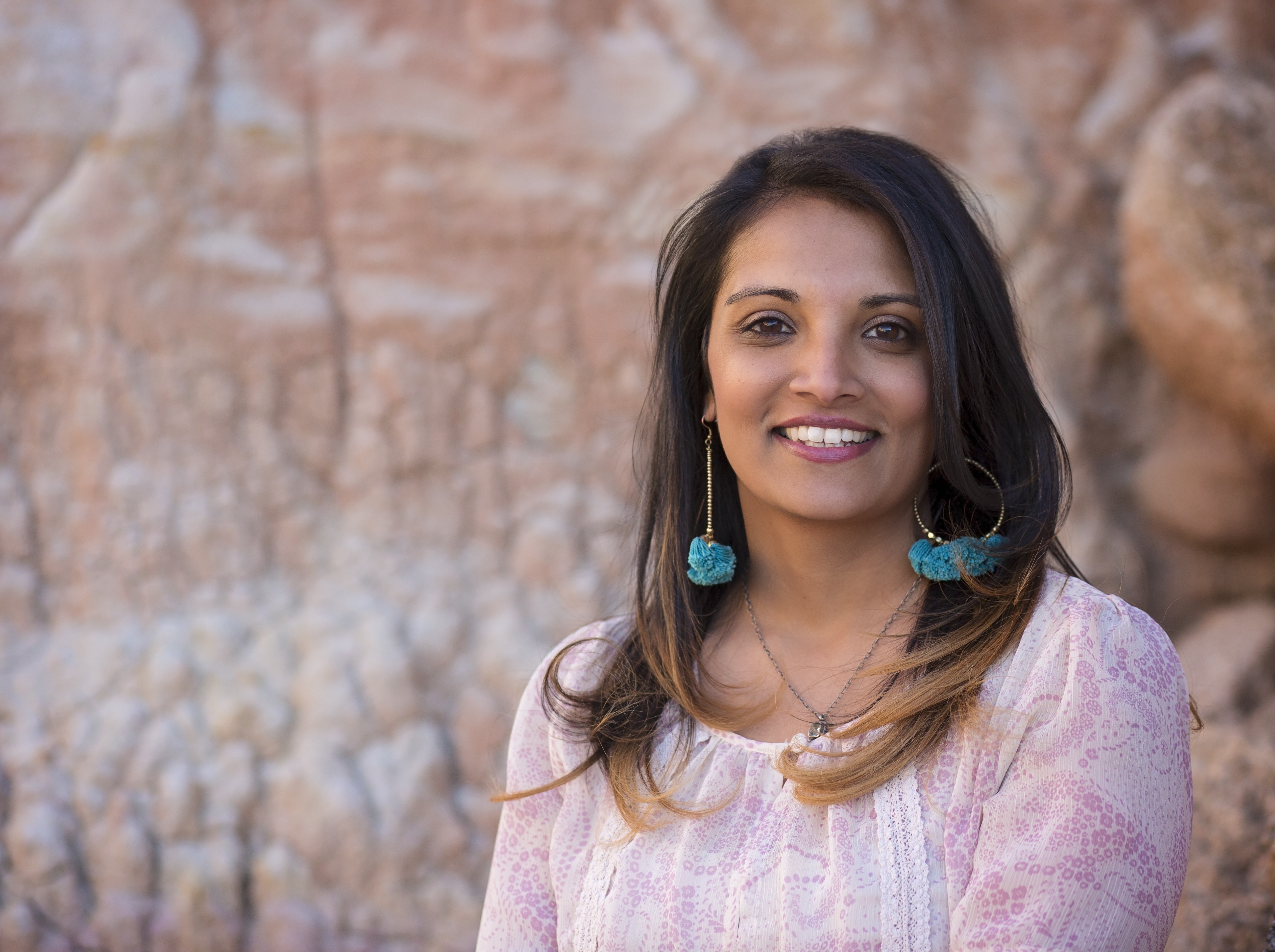 Sandhya Menon is the New York Times bestselling author of When Dimple Met Rishi; From Twinkle, with Love; and There’s Something About Sweetie. A full-time dog-servant and part-time writer, she makes her home in the foggy mountains of Colorado. Visit her online at SandhyaMenon.com.