Everyone, please welcome Debbie Rigaud to Rich in Color! Debbie’s book, TRULY MADLY ROYALLY came out yesterday, and we’re thrilled to have her here to talk about her book. Are you ready for a royal rom-com with a black heroine? I know I am! 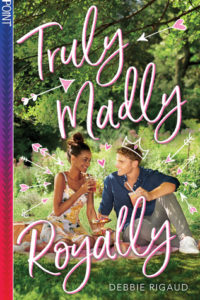 Fiercely independent and smart, Zora Emerson wants to change the world. She’s excited to be attending a prestigious summer program, even if she feels out of place among her privileged, mostly white classmates. So she’s definitely not expecting to feel a connection to Owen, who’s an actual prince of an island off the coast of England. But Owen is funny, charming…and undeniably cute. Zora can’t ignore the chemistry between them. When Owen invites Zora to be his date at his big brother’s big royal wedding, Zora is suddenly thrust into the spotlight, along with her family and friends. Everyone is talking about her, in real life and online, and while Owen is used to the scrutiny, Zora’s not sure it’s something she can live with. Can she maintain her sense of self while moving between two very different worlds? And can her feelings for Owen survive and thrive in the midst of the crazy? Find out in this charming romantic comedy that’s like The Princess Diaries for a new generation.

I was so excited when I realized that TRULY MADLY ROYALLY was going to be a royal rom-com starring a black teenage girl. Please introduce us to Zora, our heroine!

Yay! I’m so happy to hear that. Zora is definitely someone to get excited about. She loves her family and she can’t go a day without talking to her best friend. What jumps out most of all is she’s a goal-getter who dreams big. Zora is the kind of girl who comes up with a plan and then wills herself to see them through. She started an afterschool program for younger kids in her neighborhood, because she identified a need that wasn’t being met. She attends a summer program at a prestigious university just so she can learn more about securing grants for this program. While there, she meets and falls for an actual prince of a European country. The question then becomes, how distracted from her game plan will she allow herself to become. And how much of the media circus surrounding the prince is she willing to tolerate.

What are Zora’s family and community like? Who are the other important people in her life?

Zora’s family is like her neighborhood—busy, loud, with rarely a dull moment. There are tensions in her family that bubble up and we get to see how Zora addresses it and maybe move past it. At times, though, it seems like Zora is more willing to accept flaws in her neighborhood than flaws in her family. It’s a tricky thing—especially when you consider the dynamic between she and her dad. But I think her world paints a realistic picture of families we know and love. Other important people in Zora’s life are, of course, the kids from her Walk Me Home program. She devotes so much of her time and energy developing relationships with them. It’s a sweet match-up that benefits her just as much as it benefits them. Her interactions with these kids were so fun to write!

Tell us more about Owen, the prince that Zora meets at the summer program.

Owen is a prince on the loose in New Jersey. He is living abroad, an ocean away from his kingdom, and he tries to carve out some breathing room for himself—away from his watchful guards. There are past hurts that at times feel very present for him, so you get the sense that he is still in the throes of making sense of it all. Zora has caught his eye and captured his heart, and he’s willing to bypass every last protocol to see her again. Swoon!

What are some of your favorite rom-com tropes? Least favorite?

I love a good boy-next-door trope, and will stop what I’m doing to sink into a best-friends-to-lovers story. Other ones I’ve been known to enjoy: love-at-first sight, enemies-to-lovers and fake date tropes. As for ones I least enjoy, I’ll say falling for a family member or close friend’s ex. Is that even one of the standard tropes? In case it’s not, I’ll also say boss/employee romances.

You have a middle-grade book coming out later this year that is co-written with Alyssa Milano. What can you tell us about it?

Thanks for asking about it. I’m super excited about the HOPE series! It’s an illustrated chapter book that releases October 1st. The first book introduces readers to eleven-year-old Hope just as she enters and learns to navigate the sixth grade. This is not an easy transition for her. Hope’s got bullies to tame, a science competition to win, new friends to make and old relationships to repair. Most of all, she has to find her own voice. It’s a lot of fun, and there are a lot of feels. It’s amazing to be working with skilled storyteller Alyssa Milano and illustrator Eric Keyes of “The Simpsons” fame. I can’t wait for readers to meet Hope!

Thank you for stopping by to answer our questions, Debbie! 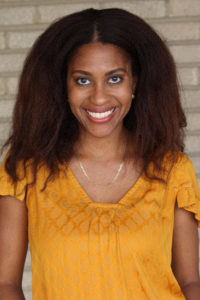