NIGHT OF THE DRAGON by Julie Kagawa is out next week, and we are thrilled to be able to share an excerpt with you! This is the final book of the SHADOW OF THE FOX series–keep an eye out for a review next week. In the meantime, there’s still plenty of time to preorder yourself a copy of NIGHT OF THE DRAGON or the earlier books in the series if you’re picking them up for the first time: 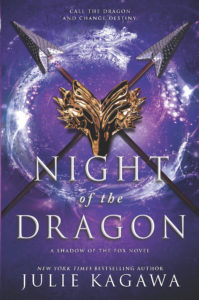 To save everyone she loves from imminent death, kitsune shapeshifter Yumeko gave up the final piece of the Scroll of a Thousand Prayers. Now she and her ragtag band of companions must make one desperate final effort to stop the Master of Demons from using the scroll to call the Great Kami Dragon and make the wish that will plunge the empire into chaos.

Shadow clan assassin Kage Tatsumi has regained control of his body and agreed to a true deal with the devil—the demon inside him, Hakaimono. They will share his body and work with Yumeko to stop a madman, and to separate Hakaimono from Tatsumi and the cursed sword that trapped the demon for nearly a millennium.

But even with their combined skills and powers, this unlikely team of heroes knows the forces of evil may be impossible to overcome. And there is another player in the battle for the scroll, a player who has been watching, waiting for the right moment to pull strings that no one even realized existed…until now.

One thousand years ago

In the long years of his existence, the number of times he had been summoned from Jigoku could be counted on one claw.

Other demon lords had been summoned before. Yaburama. Akumu. The oni lords were too powerful not to have some enterprising blood mage attempt a contract with them, though such rituals often ended badly for the arrogant human who thought they could enslave an oni lord. The four of them were, admittedly, a proud bunch, and did not take kindly to an insignificant mortal attempting to bend them to their will. They humored the blood mage long enough to hear what the human was offering, and if it did not interest them, or if the mage foolishly tried to assert dominance, they would rip him apart and do what they pleased in the mortal realm until they were sent back to Jigoku.

It had always amused Hakaimono when a mortal tried to summon him. Especially that moment when they gazed upon him for the first time and fully realized what they had done.

Narrowing his eyes, he gazed around, peering through smoke and ignoring the brief feeling of vertigo that always accompanied being dragged from Jigoku into the mortal realm. A growl of murderous annoyance rumbled in his throat. Already, he was not in the best of moods. Akumu had been scheming again, trying to weaken Hakaimono’s forces behind his back, and he had been on his way to deal with the devious Third General when black fire had erupted over his skin, words of blood magic echoing in his head as he abruptly found himself in the mortal realm. Now he stood in the center of a ruin, broken walls and shattered pillars surrounding him, the scent of death thick on the air, and contemplated squeezing the head of the mage responsible until it popped like an egg in his claws.

The stones under his feet were sticky and had a sweet, coppery smell he recognized instantly. Lines of blood had been painted over the ground in a familiar circle, with words and sigils of power woven in a complex pattern. A summoning circle, and a powerful one at that. Whomever the blood mage was, they had done their research. Though it wouldn’t save them in the end.

The First Oni looked down. A woman stood at the edge of the blood circle, black robes and long hair seeming to blend into the shadows. She clutched a knife in slender fingers, her pale arm covered in red to the elbow.

A chuckle escaped him. “Well, don’t I feel important,” he said, crouching down to better see the woman. She gazed coolly back. “Summoned by the immortal shadow herself. I am curious, however.” He raised a talon, watching the human over curved black claws the length of her arm. “If you rip off an immortal’s head, do you think it will die?”

“You will not kill me, First Oni.” The woman’s voice was neither amused nor afraid, though the certainty in it made him smirk. “I am not so foolish as to attempt a binding, nor will I ask much of you. I have but a single request, and after that, you are free to do what you like.”

“Oh?” Hakaimono chuckled, but admittedly, he was curious. Only the very desperate, foolish or powerful called on one of the four oni generals, and only for the most ambitious of requests. Like destroying a castle, or wiping out an entire generation. The risk was too great for anything less. “Let’s hear it then, human,” he prompted. “What is this one task you would have me undertake?”

“I need you to bring me the Dragon scroll.”

Hakaimono sighed. Of course. He had forgotten it was that time again in the mortal world. When the great scaly one himself would rise to grant a wish to an insignificant, short-lived human. “You disappoint me, mortal,” he growled. “I am not a hound that fetches upon command. You could have gotten the amanjaku to retrieve the scroll for you, or one of your own human warrior pets. I have been called on to slaughter armies and tear strongholds to dust. Fetching the Dragon’s Prayer is not worth my time.”

“This is different.” The woman’s voice was as unruffled as ever. If she knew she was in danger of being ripped apart and devoured by an annoyed First Oni, she did not show it. “I have already sent my strongest champion to retrieve the scroll, but I fear he has betrayed me. He wants the power of the Dragon scroll for himself, and I cannot let the Wish slip away now. You must find him and take back the scroll.”

“One human?” Hakaimono curled a lip. “Not much of a challenge.”

“You do not know Kage Hirotaka,” the woman said quietly. “He is the greatest warrior the Empire of Iwagoto has seen in a thousand years. He is kami-touched, but also trained in the way of the samurai. His talents with both blade and magic are so great, the emperor himself praised his achievements. He has killed men, yokai and demons in waves, and will be perhaps the single greatest opponent you have ever faced, Hakaimono.”

“I very seriously doubt that.” The First Oni felt a smirk cross his face as he breathed in the blood-scented air. “But now, I’m intrigued. Let’s see if this champion of shadow is as good as you say. Where can I find this demonslaying human?”

“Hirotaka’s estate lies outside a village called Koyama, ten miles from the eastern border of Kage territory,” the woman replied. “It’s not hard to find, but it is rather isolated. Aside from Hirotaka’s men and servants, you won’t be opposed. Find Hirotaka, kill him and bring the scroll to me. Oh, and one more thing.” She raised the knife, observing the bloody, glittering edge. “I cannot have anyone suspecting me of blood magic. Not now, when the night of the Wish is so close.” Her black eyes rose to his, narrowing sharply. “There can be no witnesses, Hakaimono. No survivors. Kill everyone there.”

“I can do that.” A slow grin spread across the oni’s face, and his eyes gleamed red with bloodlust. “This will be fun.”

He would come to regret those words more than any other in his existence.

NIGHT OF THE DRAGON is out on March 31st. Will you be reading it? I know I will!