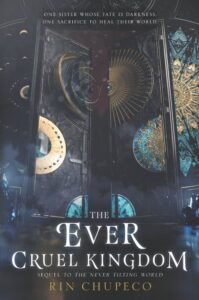 Summary: After a treacherous journey and a life-shattering meeting with a twin neither knew they had, Haidee and Odessa expected to emerge from the Great Abyss to a world set right. But though the planet is turning once again, the creatures of the abyss will not rest until they have tasted another goddess’s sacrifice.

To break the cycle, Haidee and Odessa need answers that lie beyond the seven gates of the underworld, within the Cruel Kingdom itself. The shadows of the underworld may hunger to tear them apart, but these two sisters are determined to heal their world—together.

Review: I have been looking forward to reading the conclusion to Rin Chupeco’s duology, and I’m happy to say that everything that made me enjoy the first book was present here in THE EVER CRUEL KINGDOM: exciting battle scenes, mysterious prophecies, and some great characters.

We spent much of the last book just waiting for Haidee and Odessa to meet, so it was incredibly satisfying to see them establish their familial relationship—with its high points and its lows. Their continued efforts to reconcile after harsh words or fights became increasingly important to the narrative as they learned more about their mothers, what the world was like before the Breaking, and what truly happened in the Cruel Kingdom. Their love for each other, their partners, their mothers, and the world made for some of the best scenes in the book.

Arjun and Lan held their own even though their personal stories lost some prominence in this book. (I will always be fond of protective characters, and the way the two of them unite to worry about the twins just makes me happy.) I appreciated the time Chupeco took to flesh out Lan’s storyline regarding the loss of her team. You don’t see a lot of therapy popping up in fantasy books, so I appreciated that Lan continued talking about her own healing/therapy and offering her advice/experience to others who have reason to grieve in this book. Arjun also got an exciting section of his own, though I can’t say much because of spoilers.

Chupeco has several great action set pieces in this book. I found myself tearing through them and had to force myself to slow down more than once to make sure I was tracking everything correctly. Whether it was fighting hordes of galla or exploring hidden temples, Chupeco kept the scenery vivid and the action exciting. Minor characters gained new prominence and new characters popped up, too. This book was one of the more satisfying takes on “the different factions come together to save the world” tropes that I’ve read in a while, and the stakes and the danger felt appropriately high.

I really loved the resolution to this story. There were some beautifully written moments and incredibly satisfying resolutions with some of the themes. That’s all I’ll say for fear of spoilers, but I walked away from this book thinking that the destination was absolutely worth the journey.

Recommendation: Get it soon, especially if you like fast-paced, high-stakes fantasy. Rin Chupeco ends their duology on a high note with THE EVER CRUEL KINGDOM, and fans will find a lot in its pages to enjoy as the characters uncover answers to what happened before and at the Breaking and search for a solution that isn’t just a temporary fix to this world’s problems.

Extras: COLOR THE SHELVES: Interview with Rin Chupeco, author of The Ever Cruel Kingdom