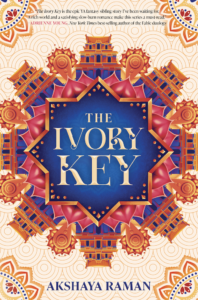 Summary: Magic, a prized resource, is the only thing between peace and war. When magic runs out, four estranged royal siblings must find a new source before their country is swallowed by invading forces. The first in an Indian-inspired duology.

Vira’s only hope is to find a mysterious object of legend: the Ivory Key, rumored to unlock a new source of magic. But in order to infiltrate enemy territory and retrieve it, she must reunite with her siblings, torn apart by the different paths their lives have taken. Each of them has something to gain from finding the Ivory Key–and even more to lose if they fail. Ronak plans to sell it to the highest bidder in exchange for escape from his impending political marriage. Kaleb, falsely accused of assassinating the former maharani, needs it to clear his name. And Riya, a runaway who cut all family ties, wants the Key to prove her loyalty to the rebels who want to strip the nobility of its power.

They must work together to survive the treacherous journey. But with each sibling harboring secrets and their own agendas, the very thing that brought them together could tear apart their family–and their world–for good.

Review: [Content warnings for THE IVORY KEY can be found here.]

THE IVORY KEY is a rich world filled with interesting magic and characters. I liked the Indian-inspired world building of Ashoka, and it isn’t often that I’ve seen a world where magic is treated as a non-renewable “natural” resource. There is a lot going on in the world of Ashoka, and a lot of characters and plots to introduce. It took me longer than I expected to sort out the siblings’ age relationships to each other, for example, but Author Akshaya Raman gave them all unique voices and motivations I could sympathize with. Once I got my footing under me, it was really interesting to see each sibling in turn from the others’ points of view.

THE IVORY KEY is heavy on the family conflict, and because that family is also royalty, the conflict is also wrapped up in politics and state secrets. Raman did a great job of giving the characters initial motivations to keep secrets from one another. However, there were times I found myself growing frustrated about all the secrecy, especially as various people’s schemes fell apart. I was also surprised by how staunchly some of Vira’s siblings were against her or blamed her for certain decisions, considering they grew up with the same parents and in the same court. Why would they assume a teenage girl who inherited a war and promptly lost her one big battle has similar power and control to the previous maharani? The lack of communication or willingness to extend grace to Vira quickly became annoying—but that may just be the eldest daughter in me talking. 🙂

The switch to a treasure hunting quest, complete with elaborate, puzzle-filled death traps, was a tonal shift that took some time getting used to after the first part of the book was largely occupied with the palace and the rest of the capital city. While that made for some really fun set pieces, I was a little disappointed that many of the palace plots were unresolved. That said, I’m enjoying the promise of a wider world and the promise of uncovering a much grander conspiracy in the sequel. I’m looking forward to seeing how Raman can wrap all of this up.

Recommendation: Get it soon. This Indian-inspired fantasy is filled with family conflicts and old secrets that get four estranged siblings to work together—and against each other. While I wish the communication between the quartet improved faster than it did, I believed in the character motivations and rooted for them to start working together. THE IVORY KEY is an interesting start to a fun world, and I’m looking forward to the conclusion.

Q&A: Akshaya Raman, Author of ‘The Ivory Key’ at The Nerd Daily