We have two books on our radar this week! Will you be checking them out? 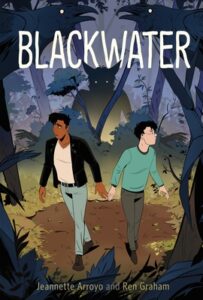 Tony Price is a popular high school track star and occasional delinquent aching for his dad’s attention and approval. Eli Hirsch is a quiet boy with a chronic autoimmune disorder that has ravaged his health and social life. What happens when these two become unlikely friends (and a whole lot more . . .) in the spooky town of Blackwater, Maine? Werewolf curses, unsavory interactions with the quarterback of the football team, a ghostly fisherman haunting the harbor, and tons of high school drama.

Co-illustrated by Jeannette Arroyo and Ren Graham, who alternate drawing chapters in their own unique and dynamic styles, Blackwater combines the spookiness of Anya’s Ghost with the irreverent humor of Nimona. — Cover image and summary via Goodreads 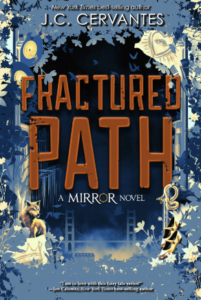 The 1960s are bursting with music and movement and love in San Francisco, perfect for a budding artist like Blake. Unfortunately, the art world is not welcoming to people of her gender or her multi-racial heritage, making it tough to land an internship that could put her on the map. That, plus the fact that Blake’s family has been notoriously riddled with bad luck, makes her feel like she can’t catch a break. Things only get worse when Blake starts to have ominous, confusing visions that grow stronger and more frequent, prompting Blake’s aunt and uncle to tell her about a long-lost family heirloom that could be the key to everything

Fueled by the ambiguous clues in her visions, Blake sets out on a journey through the city to retrieve her ancestors’ legendary mirror. But Blake is not the only one looking for it. Soon she must attempt to unleash her own dormant powers . . . or else risk all she holds dear.

Fractured Path is the third book in the YA fairy-tale quartet, following one family—and the curse that plagues it—over several generations. — Cover image and summary via Goodreads