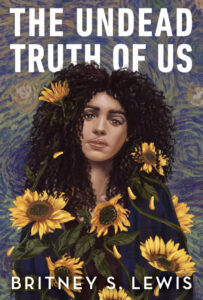 Summary: Death was everywhere. They all stared at me, bumping into one another and slowly coming forward.

In this surrealist journey of grief, fear, and hope, Britney S. Lewis’s debut novel explores love, zombies, and everything in between in an intoxicating amalgam of the real and the fantastic.

If you’re looking for a standard zombie story, THE UNDEAD TRUTH OF US will not be it. If, however, you’re looking for a blending of the mundane and the surreal, consider giving author Britney S. Lewis’s debut a chance. Lewis blurs the borders of Zharie’s reality in more ways than just the undead, from references to Vincent van Gogh’s The Starry Night to the appearance of speech bubbles to the hyper-detailed descriptions of zombies rotting. The way Lewis describes what Zharie is seeing/experiencing can be mesmerizing, whether that’s someone shift into a zombie, getting swept up in a dance, or experiencing overwhelming grief.

The zombies are Zharie’s metaphor, and she spends most of the novel trying to figure out what they are supposed to mean and why it all started with her mother and her mother’s death. I won’t spoil those revelations, but I will say that I deeply empathized with Zharie trying to make the world make sense. One of the things that THE UNDEAD TRUTH OF US did very well was how Zharie’s grief for her mother rippled out into all facets of her life. It colored her perceptions beyond the zombies, and there are a couple of moments where Zharie is angry that really stuck with me, along with the underlying sense of loss that permeated most of the book. I loved how Lewis portrayed Zharie as she handled (or didn’t handle) the loss of her mother.

Zharie’s developing relationship with Bo was fun to read. I appreciate romances where I really get why the people are becoming interested in each other (occasional slide into zombie-ness notwithstanding). Bo easily could have felt like a grief rebound, but Lewis gave their many scenes together enough depth that I was hopeful about the course their relationship would take, even if the romance didn’t work out in the end.

Recommendation: Get it now, if you’re in the mood for a surreal exploration of grief. Britney S. Lewis’s debut, THE UNDEAD TRUTH OF US, is a thoughtful look at a teenager trying to come to terms with the death of her mother and how to figure out her future. The prose is lovely, and the captivating narration creates depth to the world and the blossoming relationship between Zharie and Bo.

Zombie Books Reimagined: Sunflowers, Grief, and the Undead Truth of Us

TOUR SCHEDULE: The Undead Truth of Us