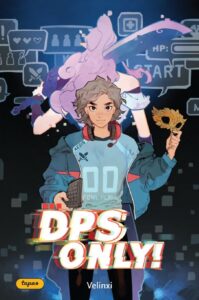 Summary: This captivating coming-of-age story set in the world of e-sports will have readers cheering for girl gamer Vicky Tan as she overcomes social anxiety, self-doubt, and an overprotective big brother to pursue her dream of becoming a competitive gamer. From the Tapas webcomic, a 2021 Eisner Award nominee.

High school student Vicky lives a secret life. To most, she is a meek pushover, often in the shadow of her e-sports superstar of a brother, Virgil. Unknown to anyone, however, she dons a secret identity when she logs on to play Xenith Orion, the multiplayer game dominating the e-sports scene. She knows firsthand the harassment female gamers often experience, but when an opportunity arises in a local tournament, Vicky—mask in hand—cannot resist the challenge. Sneaking around and hiding only works for so long, and once the truth comes out, what will it mean for Vicky and those who trusted her?

I’ve been on a webcomic kick the last several months, so I was excited to get my hands on an eARC of DPS ONLY! I’d never read the original comic (on Tapas), but the publishing team did a great job of converting the (vertical, long-scroll) episodes to traditional pages/spreads for printing. There were only a handful of places where I was uncertain about where I should be looking first—not bad at all for having to reformat everything in a different orientation!

Creator Xiao Tong Kong (aka, Velinxi) put together an engaging, one-volume story. I really enjoyed Velinxi’s art style, especially the character design and color palettes. The “in game” views of Xenith Orion were interesting, though I was occasionally confused by what was going on when the action got complicated. Part of that is certainly due to my inexperience with games like Xenith Orion; DPS ONLY! does include some definitions/explanations of various terminology throughout, which were very useful.

So far as the story goes, our heroine Vicky has been hiding her interest in Xenith Orion from her brother—and with the strangers she plays online with as well. The (real-world) sexism/misogyny in e-sports is never far away from the center of the story, from Virgil’s well-meaning but patronizing attitude to Vicky getting hit on at tournaments to the harassment female players experience from both players and fans. I really appreciated that Velinxi included other female players in addition to Vicky—such as Opal, one of Vicky’s teammates, and Fangs, part of the Hunting Howls team—as it was nice to see that even in a story where Vicky feels like she has to hide her identity, there are other female players competing and thriving at a high level.

The one plotline I really didn’t enjoy was Virgil being hostile to Opal and Eric, and especially how Virgil kept hounding Eric about hanging around Vicky. The age difference between Eric and Vicky is Virgil’s concern, but it gets uncomfortable fast since Eric is the only Black character in the main cast and Virgil is pretty convinced Eric has nefarious designs on Vicky. This very much soured my opinion of Virgil, and I almost wished DPS ONLY! had been longer just so I could see more of Virgil repairing his relationship with Vicky and actually building relationships with Opal and Eric. As it is, I was a little miffed by how quickly all of that was resolved.

Recommendation: Pre-order it if you’re interested in e-sports. Xiao Tong Kong created a solid one-volume work about a teenage girl who feels like she has to hide herself to succeed at what she loves. It’s an interesting peek into the uphill battle female players face, and I’ll be checking out the creator’s latest project.