Horrors of History: City of the Dead 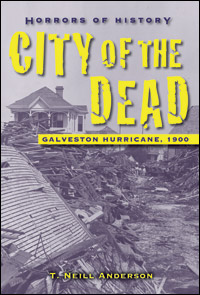 Horrors of History: City of the Dead by T. Neill Anderson

Summary: Based on the natural disaster that nearly destroyed Galveston, Texas.

The year was 1900–a time before cars, evacuation routes, and up-to-the-minute weather reports. It was the day the deadliest storm in US history hammered Galveston, Texas. It was the day an entire island city was nearly wiped from existence.

At the onset of the hurricane, Albert Campbell and the other boys at the orphanage kicked and splashed in the emerging puddles. Daisy Thorne read letters from her fiancé, and Sam Young wondered if his telegram had reached the mainland, warning his family of the weather.

Just a few hours later, torrential rains and crushing tidal waves had flooded the metropolis. Winds upwards of one hundred miles per hour swept entire houses and trees down the streets. Debris slashed through the air; bodies whirled amid the rushing waters. Albert, Daisy, and Sam weren’t safe. No one was.

Based on an historic natural disaster, City of the Dead weaves together a shocking story where some miraculously survive . . . and many others are tragically lost.