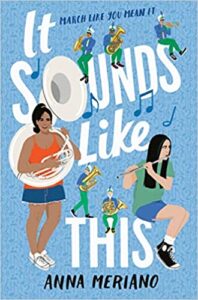 Yasmín Treviño didn’t have much of a freshman year thanks to Hurricane Humphrey, but she’s ready to take sophomore year by storm. That means mastering the marching side of marching band—fast!—so she can outshine her BFF Sofia as top of the flute section, earn first chair, and impress both her future college admission boards and her comfortably unattainable drum major crush Gilberto Reyes.

But Yasmín steps off on the wrong foot when she reports an anonymous gossip Instagram account harassing new band members and accidentally gets the entire low brass section suspended from extracurriculars. With no low brass section, the band is doomed, so Yasmín decides to take things into her own hands, learn to play the tuba, and lead a gaggle of rowdy freshman boys who are just as green to marching and playing as she is. She’ll happily wrestle an ancient school tuba if it means fixing the mess she might have caused.

But when the secret gossip Instagram escalates their campaign of harassment and the end-of-semester band competition grows near, things at school might be too hard to bear. Luckily, the support of Yasmín’s new section—especially new section leader Bloom, a sweet and shy ace boy who might be a better match for her than Gilberto—might just turn things around. — Cover image and summary via Goodreads