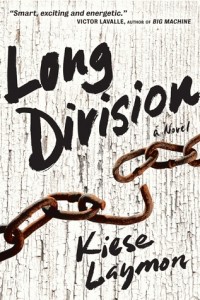 Summary: This dazzling debut novel is a Twain-esque exploration of celebrity, authorship, violence, religion, and coming of age in Post-Katrina Mississippi, written in a unique comic voice that’s scabrous, lacerating, tender, and wise. The book’s two interwoven stories span from the “Freedom Summer” early sixties through the mid-Eighties and up to the present day. In the first, 14-year-old Citoyen “City” Coldson becomes an overnight YouTube celebrity after an onstage meltdown during a nationally televised quiz contest. The next day, he’s sent to his grandmother’s small coastal community, where a young girl named has Baize Shephard recently disappeared.

Before leaving, City is given a strange book called “Long Division.” He discovers that one of the book’s main characters is also named City Coldson—but “Long Division” is set in 1985. This City becomes embroiled in a wild adventure that leads him to an orphaned teenage rapper named…Baize Shephard. City’s two stories ultimately converge in the mysterious shed behind his grandmother’s house, where he finally discovers the key to Baize’s disappearance. Long Division is a stunning meta-tale of rebirth, love, and literary redemption. — cover image and summary via publisher’s website