Passenger on the Pearl: The True Story of Emily Edmonson’s Flight from Slavery 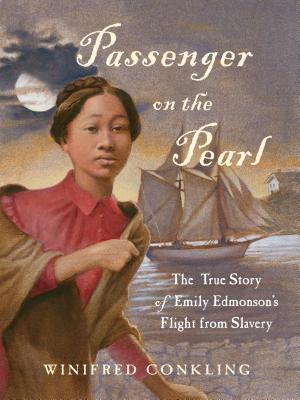 Passenger on the Pearl: The True Story of Emily Edmonson’s Flight from Slavery by Winifred Conkling
Algonquin Young Readers

The page-turning, heart-wrenching true story of one young woman willing to risk her safety and even her life for a chance at freedom in the largest slave escape attempt in American history.In 1848, Emily Edmonson, thirteen, along with five siblings and seventy other enslaved people, boarded the “Pearl “in the Potomac River in Washington, D.C., in a bid to reach freedom. Within a day, the schooner was captured, and the six Edmonsons were sent to New Orleans to be sold. Emily and Mary were saved from the even crueler conditions when the threat of yellow fever forced their return to Virginia. They were eventually ransomed with the help of their parents and abolitionists, including Harriet Beecher Stowe, who later used them as models for characters in “Uncle Tom s Cabin.” Both girls went to Oberlin College, where Mary died of tuberculosis. Emily graduated and became a teacher at the first school in Washington, D.C., dedicated to the education of African American girls and young women–an idea so controversial that even Frederick Douglass advised against it. Emily also worked on behalf of abolition for the rest of her life.”Passenger on the Pearl” illustrates a turbulent time in American history as seen through the daily lives of enslaved people; the often changing laws affecting them; the high cost of a failed attempt to reach liberty; the fate of all fourteen of the Edmonson children and their mother, Milly, whose goal to die a free woman shaped the lives of all her children; and the stories of the slave traders and abolitionists whose lives intersected with the Edmonsons .With more than fifty period photographs and illustrations. — Cover image and summary via Goodreads