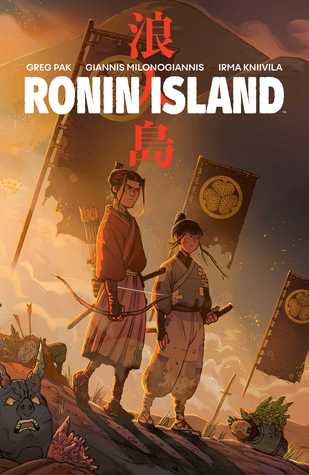 After a catastrophic event changes 19th century Japan, Korea, and China, two young soldiers must protect their peaceful island home from a warlord’s oncoming forces and newly mutated creatures that threaten to destroy the world as they know it.

After a mysterious attack devastates a great swath of 19th century Japan, Korea, and China, survivors from all three lands find refuge on a hidden island and build a new society. Hana, the orphaned daughter of Korean farmers, and Kenichi, son of a great samurai leader, have little in common except for a mutual disdain for the other. But these young warriors will have to work together when an army invades the island with shocking news: the Shogun has returned and the Island is expected to pay fealty in exchange for protection from a new threat…a mutated horde that threatens to wipe out all humanity.

Written by bestselling author Greg Pak (Mech Cadet Yu, Star Wars) and beautifully illustrated by Giannis Milonogiannis (Old City Blues, Prophet), Ronin Island explores an idealistic coming-of-age story against the backdrop of a morally grey time of war where the reasons for fighting are questioned at every turn.