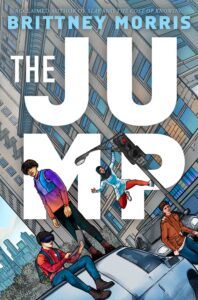 Jax, Yas, Spider, and Han are the four cornerstones of Team Jericho, the best scavenger hunting team in all of Seattle. Each has their own specialty: Jax, the puzzler; Yas, the parkourist; Spider, the hacker; and Han, the cartographer. But now with an oil refinery being built right in their backyard, each also has their own problems. Their families are at risk of losing their jobs, their communities, and their homes.

So when The Order, a mysterious vigilante organization, hijacks the scavenger hunting forum and concocts a puzzle of its own, promising a reward of influence, Team Jericho sees it as the chance of a lifetime. If they win this game, they could change their families’ fates and save the city they love so much. But with an opposing team hot on their heels, it’s going to take more than street smarts to outwit their rivals. — Cover image and summary via Goodreads