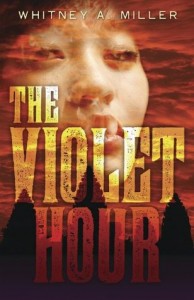 Summary: The voice inside me is breaking free. I can’t stop it.

Some call VisionCrest the pinnacle of religious enlightenment. Others call it a powerful cult. For seventeen years, Harlow Wintergreen has called it her life.

As the daughter of VisionCrest’s patriarch, Harlow is expected to be perfect at all times. She must be considered a paragon of integrity by the other Ministry teens and a future leader in the eyes of the world.

Despite the constant scrutiny Harlow is keeping a dark and dangerous secret, even from her best friend and the boy she loves. She hears a voice in her head that seems to have a mind of its own, plaguing her with violent and bloody visions. It commands her to kill. And the urge to obey is getting harder and harder to control….  — Cover image and summary via Goodreads