Well, That Was Unexpected 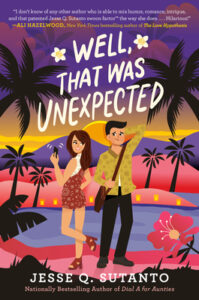 Well, That Was Unexpected by Jesse Q. Sutanto
Delacourte Press

After Sharlot Citra’s mother catches her in a compromising position, she finds herself whisked away from LA to her mother’s native Indonesia. It’ll be exactly what they both need. Or so her mother thinks.

When George Clooney Tanuwijaya’s father (who is obsessed with American celebrities) fears he no longer understands how to get through to his son, he decides to take matters into his own hands.

To ensure that their children find the right kind of romantic partner, Sharlot’s mother and George’s father do what any good parent would do: they strike up a conversation online, pretending to be their children.

When the kids find out about their parents’ actions, they’re horrified. Not even a trip to one of the most romantic places on earth could possibly make Sharlot and George fall for each other. But as the layers peel back and the person they thought they knew from online is revealed, the truth becomes more complicated. As unlikely as it may seem, did their parents manage to find their true match after all? — Cover image and summary via Goodreads