What Souls Are Made Of: A Wuthering Heights Remix 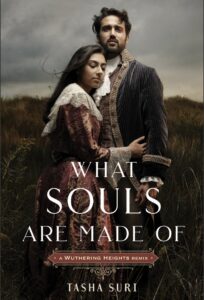 What Souls Are Made Of: A Wuthering Heights Remix by Tasha Suri
Feiwel & Friends

As the abandoned son of a Lascar—a sailor from India—Heathcliff has spent most of his young life maligned as an “outsider.” Now he’s been flung into an alien life in the Yorkshire moors, where he clings to his birth father’s language even though it makes the children of the house call him an animal, and the maids claim he speaks gibberish.

Catherine is the younger child of the estate’s owner, a daughter with light skin and brown curls and a mother that nobody talks about. Her father is grooming her for a place in proper society, and that’s all that matters. Catherine knows she must mold herself into someone pretty and good and marriageable, even though it might destroy her spirit.

As they occasionally flee into the moors to escape judgment and share the half-remembered language of their unknown kin, Catherine and Heathcliff come to find solace in each other. Deep down in their souls, they can feel they are the same.

But when Catherine’s father dies and the household’s treatment of Heathcliff only grows more cruel, their relationship becomes strained and threatens to unravel. For how can they ever be together, when loving each other—and indeed, loving themselves—is as good as throwing themselves into poverty and death? — Cover image and summary via Goodreads