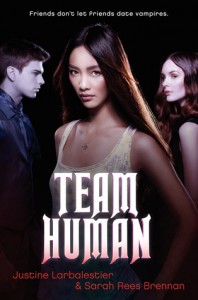 Summary: Readers who love vampire romances will be thrilled to devour Team Human by Justine Larbalestier and Sarah Rees Brennan. Team Human celebrates and parodies the Twilight books, as well as other classics in the paranormal romance genre.

Mel is horrified when Francis Duvarney, arrogant, gorgeous, and undead, starts at her high school. Mel’s best friend, Cathy, immediately falls for the vampire. Cathy is determined to be with him forever, even if having him turn her could inadvertently make her a zombie.

And Mel is equally determined to prove to her BFF that Francis is no good, braving the city’s vampire district and kissing a cute boy raised by vampires as she searches evidence in this touching and comic novel. —(Summary and image via Goodreads)

Review: Team Human works best if you are familiar with and have a fondness for vampires. Even though I’m only middling on both of those criteria, Justine Larbalestier and Sarah Rees Brennan did a great job of keeping my interest with Mel, their American Born Chinese protagonist.

What I find most fascinating about Mel is how, in a book from Cathy’s point of view, she would fit neatly into the Meddling Second Lead™ role. Most books and Korean television shows have trained me to despise such characters and their repeated attempts to break up True Love™, but I adored seeing the vampire romance play out from Mel’s point of view. The fact that Mel is motivated by genuine concern and fear for her friend (as opposed to romantic jealousy) helps a great deal in this regard. While I was occasionally annoyed by Mel’s insistence that she knew what was better for Cathy than Cathy did, I was still extremely sympathetic to her. In her place, I probably would have acted much the same after my best friend fell in love with and decided to become a vampire (which carried a 10% chance of death and a 10% chance of zombification) in a matter of weeks.

The other character standout was Kit, the vampire-raised human that Mel falls for. Kit’s backstory (and how some of his vampire family treated him) made me rather upset on his behalf and wishing for all sorts of bad fortune upon minor characters. Despite this, Kit was consistently a source of humor and awkward misunderstandings thanks to his lack of knowledge about human society. Some of these misunderstandings were brilliant and hilarious (kissing) and others were disappointingly easy to predict (promising to call).

The world building for this book was unexpectedly delightful, from therapists who deal with vampires who are having trouble transitioning to laws requiring smoked glass in all public buildings to block vampire-killing UV rays. I love that turning people into vampires is a regulated process requiring counseling and you-could-turn-into-a-zombie scare tactics. Mundane details like that really make this world feel like it could exist if vampires were real.

Unfortunately, the mystery surrounding Anna, her mother, and her missing father wasn’t something that held my attention very well. If Anna had been the narrator, I would have been more invested in it, but Mel was constantly distracted by getting in the way of True Love™ or establishing a loveline of her own. While I’m normally not much of a comedy person, I really wish that Team Human had focused more on the comedy/satire of the vampire genre and less on a mystery that I did not find compelling.

Recommendation: Borrow it someday. Ultimately, Team Human is a quick read, but it doesn’t have much staying power for me. It would be a great beach book for the last part of summer, especially if you are in the mood for some gentle mocking of vampire tropes.