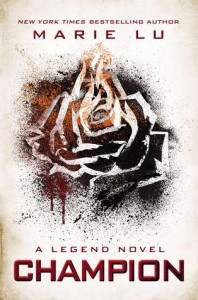 Review: I wish I could write gushing praise for Champion. I really wanted to say that I loved the novel and everyone needs to run out and buy it right now. I wish I could say a lot of things, but what I truly wish for is a different ending to the book. For me, I might enjoy 80-90% of a book, tv, or movie, but if the ending is not done well, then I usually end up disappointed with the entire product. Unfortunately, I did not like the ending to Champion and it has sullied my entire enjoyment of the novel. I will not say why I didn’t like the book because I’m not one to ruin someone’s reading pleasure and give away the end of the book, so you’ll just have to read it for yourselves.

The rest of the novel, with the exception of the last 20 pages, was tense with almost non-stop action. After all, the entire book encompasses a very short time period (a week, I think) where Day and June are literally fighting for their lives, for the lives of the people of the Republic, as well as trying to find a cure for the new plague. This makes for some very intense moments where Day and June have to make adult decisions that will effect their entire nation. That is a lot of responsibility for teenagers, but as established in Legend and Prodigy, Day and June are not ordinary teenagers. Their relationship begins strained at the beginning of the novel, but they eventually come together and the scene where they finally admit how they feel for each other is one of the best in the book. I cheered for them and hoped against hoped that Day and June would be able to have their happy ending. At that point in the story, it really didn’t look like that was going to happen, so much Kudos to Marie Lu for keeping the reader in such suspense.

One aspect of Champion that I really loved was learning more about the world that Day and June live in. In my copy there was a map of the world that showed how the melting of the glaciers affected the entire globe. We learn that Africa is a superpower and that Antarctica is a thriving continent, with a wonderful super-charged technology advanced city and even has their own language. This attention to world building detail thrilled me and I even wondered what the Antarctican language sounded like and where it’s roots where. While Prodigy explained more of what happened to the United States, Champion gives more information as to how the world changed and the former US’s status among the world’s governments. To me, the world that Lu created feels very real and I can imagine our future turning into Day and June’s familiar world.

Overall, maybe my disappointment comes from having Day and June’s story come to an end. I seriously loved Legend and Prodigy, and was eagerly anticipating Champion. Day and June, for me, are one-of-a-kind characters and I grew to really care for them. I cared for each of their individual stories, their heartaches, and I cared for them as a couple. I felt they were a realistic portrayal of a couple who pushes and challenges the other to be better, while at the same time can work together as a team. That type of relationship is uncommon in Young Adult fiction these days, but I hope that more publishers take note on the popularity of Lu’s series and publish more novels where the teens are equals to each other instead of a lopsided relationship.

Marie Lu, thank you for giving us Day and June. I will miss them greatly.