We found several books being released this week. I had to update this post in the evening since I found Gilded later in the day. I loved Eliot Schreffer’s book Endangered and look forward to seeing what he does in Threatened. I have been a fan of fairytale retellings since I was a child so I am also excited to get my hands on Grim too. Not every short story in Grim is by or about a person of color, but it is certainly a diverse group so we are including it. I hadn’t heard of Gilded before today, but it looks interesting too. 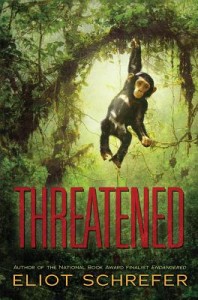 Summary: Into the jungle. Into the wild. Into harm’s way.

When he was a boy, Luc’s mother would warn him about the “mock men” living in the trees by their home — chimpanzees whose cries would fill the night.

Luc is older now, his mother gone. He lives in a house of mistreated orphans, barely getting by. Then a man calling himself Prof comes to town with a mysterious mission. When Luc tries to rob him, the man isn’t mad. Instead, he offers Luc a job.

Together, Luc and Prof head into the rough, dangerous jungle in order to study the elusive chimpanzees. There, Luc finally finds a new family — and must act when that family comes under attack.

As he did in his acclaimed novel Endangered, a finalist for the National Book Award, Eliot Schrefer takes us somewhere fiction rarely goes, introducing us to characters we rarely get to meet. The unforgettable result is the story of a boy fleeing his present, a man fleeing his past, and a trio of chimpanzees who are struggling not to flee at all. — Cover image from IndieBound & summary from author’s page

Here’s an interview with Eliot talking about the book and writing from a different perspective.

Another interview may be viewed below. 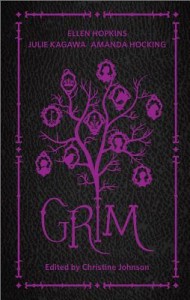 — Cover image and summary via IndieBound 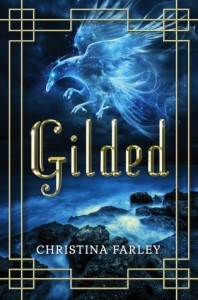 Summary: Sixteen-year-old Jae Hwa Lee is a Korean-American girl with a black belt, a deadly proclivity with steel-tipped arrows, and a chip on her shoulder the size of Korea itself. When her widowed dad uproots her to Seoul from her home in L.A., Jae thinks her biggest challenges will be fitting in to a new school and dealing with her dismissive Korean grandfather. Then she discovers that a Korean demi-god, Haemosu, has been stealing the soul of the oldest daughter of each generation in her family for centuries. And she’s next.

But that’s not Jae’s only problem.

There’s also Marc. Irresistible and charming, Marc threatens to break the barriers around Jae’s heart. As the two grow closer, Jae must decide if she can trust him. But Marc has a secret of his own—one that could help Jae overturn the curse on her family for good. It turns out that Jae’s been wrong about a lot of things: her grandfather is her greatest ally, even the tough girl can fall in love, and Korea might just be the home she’s always been looking for.  –Cover image and summary via Goodreads