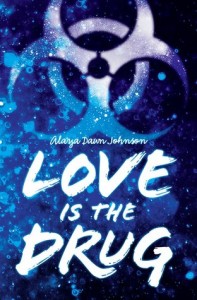 Summary: Emily Bird was raised not to ask questions. She has perfect hair, the perfect boyfriend, and a perfect Ivy-League future. But a chance meeting with Roosevelt David, a homeland security agent, at a party for Washington DC’s elite leads to Bird waking up in a hospital, days later, with no memory of the end of the night.

Review: Having loved Johnson’s “The Summer Prince”, I was really looking forward to “Love is the Drug.” I can’t say that I didn’t like it because it was a compelling read, moved at a fast pace, and I enjoyed Johnson’s lush writing. I think what makes me pause, and this is strictly a personal thing, is that I figured out the twist way before (like early in the book), so I was constantly waiting for the reveal and for Bird to discover the truth. The fact that she doesn’t learn it until practically the very end bothered me. I wanted to spend more time with her after she learned the truth and how it effected her relationships with the important people in her life. Instead, we’re given a solution to one of the conflicts, which I will commend Johnson here for not making it an easy solution, and then the novel is over. There is a part of me that longs for a sequel to the book, though I’m pretty sure the story is finished.

One of Johnson’s greatest strengths is to create compelling characters that we all can relate to, and Emily Bird is no exception. Bird, as she comes to call herself, through her experience with a fateful night grows from a scared young girl under her mother’s thumb into a smart, vibrant, young woman holding her own. The novel is told in third person, but slips into first person occasionally, which I believe is to show how the woman within Bird emerges. I will admit, some of those parts threw me out of the story, but aside from those sparse moments, Bird’s voice is strong and she learns to stand up for herself, even fight for herself. She comes to an awareness of how empty and shallow her life was turning out to be, and realizes that she is much happier following her heart. A moment in particular that stands out to me is when Bird decides to cut off her hair, reveling in the afro she now has. She knows she’s going to receive criticism from her mother, lose her social status as school because of it, but she doesn’t care. She owns herself in that moment and stands up for her rights to anyone who tries to tell her otherwise. That wisdom that she has, many women are still searching for, and I commended her for it. It didn’t seem out of character or unrealistic at all for a teenager to feel that way because I know a number of African American young girls who have decided to own their beauty and wear their hair natural. Bird also doesn’t hold back on her comments regarding privilege and race, which I found refreshing in a Young Adult novel. Often times the concept of privilege and race, specifically from African Americans with money, is glossed over (or not even written about!), that I loved how Johnson, through Bird, hit the topics head on. Bird is a type of young girl I would like to know and is one of the reasons I enjoyed the novel.

Lastly, while “The Summer Prince” was otherworldly and fantastical, the tone of “Love is the Drug” is vastly different. While a time period is not explicitly stated, it feels like it could be our current day as the world wide tensions focus on Venezuela and Iran, two countries of concern to our government right now. The novel could take place in our very near future, and the aspect of such an event intrigued me. Like Octavia Butler’s “Parable of the Sower”, Johnson takes our current society and asks, what if this happened as a result of our actions? Asking these type of questions, looking into a potential future is was speculative fiction is all about and Johnson hits all the right notes in this novel.