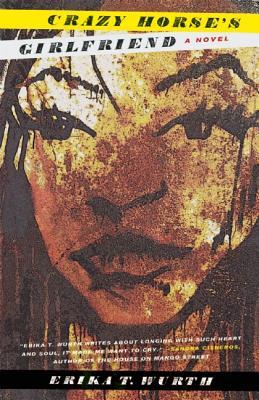 Today we are happy to welcome Erika Wurth, author of Crazy Horse’s Girlfriend. It’s a highly recommended book that we recently reviewed here recently. Erika teaches creative writing at Western Illinois University and she’s been a guest writer at the Institute of American Indian Arts. She’s Apache/Chickasaw/Cherokee and was raised outside of Denver.

Summary via publisher: Margaritte is a sharp-tongued, drug-dealing, sixteen-year-old Native American floundering in a Colorado town crippled by poverty, unemployment, and drug abuse. She hates the burnout, futureless kids surrounding her and dreams that she and her unreliable new boyfriend can move far beyond the bright lights of Denver that float on the horizon before the daily suffocation of teen pregnancy eats her alive. Filled with complex characters overcoming and being overcome by circumstances of their surroundings, Crazy Horse’s Girlfriend thoroughly shakes up cultural preconceptions of what it means to be Native American today.

Interview: From the first chapter, I cared about Margaritte. Though on the surface our lives look very different, I connected with her almost immediately and her voice drew me completely into the story. Could you tell us a little about how Margaritte came to life in your mind?

Marguerite is a compilation of my best friend growing up, my sister, me and many voices of the girls that I knew growing up right outside of Idaho Springs (I grew up right outside of Denver, between Evergreen and Idaho Springs and was bussed to school to Idaho Springs). I, like many kids, read (though I was kind of alone in my reading habits growing up) mainly genre fiction, in my case fantasy and some sci-fi and some horror – and a lot of it is written from third person omniscient perspective – so that’s what I wanted to write in initially. But Margaritte’s voice came over me one day, when I was 24 – and it became a short story of the same title (except I pushed Crazy and Horse together, because that’s what people had done to Lakota people that I had grown up with) and I realized later that many of the people that I grew up with have these really bombastic and unique ways of speaking that only first person point of view could capture.

Throughout the novel, characters are struggling as they face poverty, addictions, violence and questions of identity. Futility is a word that comes up, yet Margaritte and others are still able to maintain hope. That is what I will remember most about the book – that resiliency and hope for the future. Are you generally a person that sees the glass as half-full?

I’m not somebody who shies away from darkness but what I struggled with was trying to show something realistic while at the same time not reinforcing the idea that just because you’re not from a white middle-class suburban background or from a wealthier background, that you deserved the life you were born into.

Identity, stereotypes, and how people define themselves and others are important themes in the book. What led you to explore these themes?

I think that if you’re native and honestly in my opinion if you’re anything you’re forced to work out those things (even if you’re not conscious of this process), identity or stereotype every day. If you’re native though, people confront you very loudly and consistently with how you should look or where you should live or what your life should be like and so you end up having to talk about your identity. There’s tremendous energy around a fantasy pan-Indian Native American, some mythical creature who is really super authentic and whether you’re from a reservation or an area like mine where a lot of native people live I don’t think you’re going to fit into that fantasy. But at the same time our identities are so complicated that we end up in the position of being forced to think about things that your average American might not. For example I grew up with people who would say they were part Cherokee, loads of people who would say that, but there seemed to be absolutely no connection to anything that I would personally recognize as native and people who obviously clearly were. And for a non-native that would be all about looking Indian in a way that’s completely formed by American media. But for me it has almost nothing to do with that. And how do you explain that to an outsider?

I often wonder what authors think when their young adult book is labeled “gritty.” Was that a term you expected to see applied to Crazy Horse’s Girlfriend and how do you generally describe your book?

Actually, it’s the other way around, I have never had any attention to write young adult literature. But what’s strange to me is that when something is written by or about a white male who is straight, it’s coming-of-age, but if it’s written by a woman or person of color or a queer person it’s young adult. And honestly my work is gritty but when my work is labeled vulgar or on the other side Pollyanna simply because there is an incredibly lazy mis-reading of the end of the novel, I feel like this has a lot to do with the fact that my main character is a woman and a minority and a Native person and there’s a lot of preciousness around those things.

I’m looking forward to reading a lot more of your work. You’ve written an adult collection of poetry and had short stories, poems and essays published in many journals. Was this a one time deal with young adult fiction? What drew you to writing for young adults?

Like I said, I don’t really write young adult fiction and I have never had any intention to write young adult fiction and I don’t really consider the novel young adult per se. My press labeled it for me, as literary/young adult crossover. I think that’s because the protagonist is 16 and young people are reading in record numbers so if the protagonist is young it’s going to be labeled that way. One of the people who reviewed my novel, a woman named Debbie Reese, who is just incredibly smart, when I asked her about this label because this is a lot of what she does is look at young adult fiction for native people and about native people, said that she felt like young adults deserve literature too. So though I have no particular interest in writing for any age category specifically, if I think about who I would love part of my audience to be it would be young people who need to see stuff like this, a mirror they’re not getting back in anything else.

When talking about diverse literature, many people refer to books that are mirrors and windows. Have there been mirror and window books that impacted you as a young adult or shaped your writing journey?

That’s funny that you use that word mirror because I was just using it above. Yeah definitely, when I was younger I read sci-fi and fantasy almost exclusively like I said above, and some horror as well – and those escape portals were incredibly important for me. I loved Piers Anthony and I loved Stephen King and I’ve started reading sci-fi again and literary fantasy, like Lev Grossman, whose magician series I love more than I can even say. But the missing factor for me was definitely literature that was a bit more of a mirror, so when I started reading people like Sherman Alexie, Junot Diaz, Langston Hughes, Jhumpa Lahiri, Richard Wright and Sandra Cisneros that took me in the direction that I absolutely needed to go.

Is there anything else that you wished I had asked like what is your favorite comfort food or something equally non-bookish?

Well, I can say that I generally talk about a couple things, like how Idaho Springs where the novel is set, being a hard place for me growing up as the mullet was an incredibly popular fashion choice and it happened to not be my fashion choice. And the fact that I generally ate lunch under the display case, reading my Dragon books, to get away from the mullets – who made it clear that they did not like me. And another aside would be that because my mother was a dancer and because my dad was an engineer, I love ballet and I love the hard sciences. Those are things I think people wouldn’t expect, reading my work.