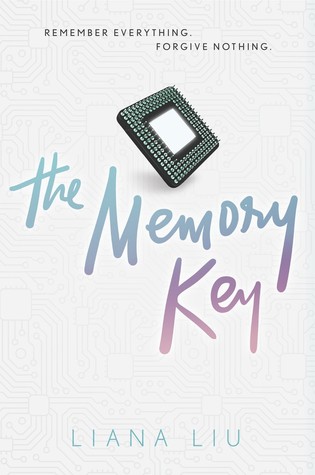 Summary: Lora Mint is determined not to forget. Though her mother’s been dead for five years, Lora struggles to remember every detail about her—most importantly, the specific events that occurred the night she sped off in her car, never to return. But in a world ravaged by Vergets disease, a viral form of Alzheimer’s, that isn’t easy. Usually Lora is aided by her memory key, a standard-issue chip embedded in her brain that preserves memories just the way a human brain would. Then a minor accident damages Lora’s key, and her memories go haywire. Suddenly Lora remembers a moment from the night of her mother’s disappearance that indicates her death was no accident. Can she trust these formerly forgotten memories? [Image and summary via Goodreads]

Review: I’ve been trying my hand at reading more science fiction, so coming upon The Memory Key was a happy accident. The premise — a world hit by a forgetting disease that sounds like Alzheimer’s and the resulting emergence of ‘memory keys’ to treat this issue – is just close enough to real life to be an accessible and fascinating story.

Memory keys that preserve, well, memories are planted in nearly everyone after Vergets disease sweeps the nation several decades previous. When Lora Mint’s memory key is damaged, she starts to remember things that throw her whole life — and her mother’s death — into doubt. The weaving of memories insistently resurfacing with Lora’s struggle to discover the truth is well-executed. Sleuthing-via-memories was fascinating to read.

The presence of a variety of characters — friends, family, random adults — lent realism to the world. Lora certainly doesn’t live in the mysteriously adult-free world that quite a few YA books seem to be set in. Unfortunately, the resemblance to real life goes a little too far. In a futuristic world where chips can be implanted in your brain, every other technology is curiously non-futuristic, more like the good ol’ 90s than anything. It was hard to get a real grasp of place.

Similarly, figuring out who Lora was, despite being inside her head for a good portion of the book, proved difficult. Her personality came out the strongest in her forays into romance — I admit, despite being a little squicked out by the end game. The high point of Lora’s character and the story comes through in Lora’s search for the truth about her mother. That was enough to pull me in and make me invested in the story.

The Memory Key is a solid, accessible science-fiction YA book. I especially recommend it for anyone looking to get into science fiction but is wary of getting in over their head. It’s definitely a page-turner!