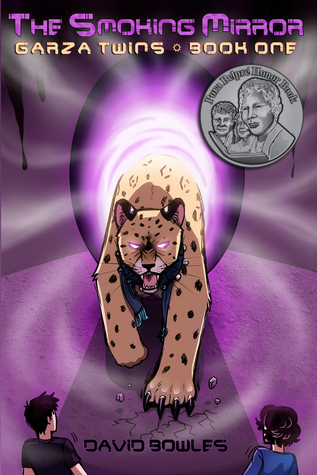 Summary: Carol and Johnny Garza are 12-year-old twins whose lives in a small Texas town are forever changed by their mother’s unexplained disappearance. Shipped off to relatives in Mexico by their grieving father, the twins soon learn that their mother is a nagual, a shapeshifter, and that they have inherited her powers. In order to rescue her, they will have to descend into the Aztec underworld and face the dangers that await them.

Review: The Smoking Mirror is exactly the kind of book I wish I’d been able to stumble across when I was in the target audience’s age range. Protagonists of Mexican descent as heroes in a fantasy book? Facing trials in nine levels of a hellish underworld to save their mom? That would have meant the world to me when I was twelve, and as an adult, it still makes me really happy. It also made a lot of other people happy—The Smoking Mirror was named a 2016 Pura Belpré Honor book.

Author David Bowles straddles the line between middle grade and young adult with The Smoking Mirror. It is a great action/adventure story—the nine levels of the Mictlan prove to be a harrowing (and gruesome) checklist for the Garza twins to get through. Each section is distinct (and terrifying), populated by gods and monsters who get in their way, and thereby keep the pace from lagging by providing ever-new challenges for the twins. Each time they made it through a level of the underworld, I was eager to see what they would be up against next. Occasionally, it felt as if their victories weren’t as difficult as I wished they were, but there were many other, more satisfying encounters.

While I felt that some of the writing was weak in places (or distracting—my taste in humor didn’t always line up with the author’s) and wished that there had been more space to explore the world (including their relationship with their grandmother and their family’s grief), Bowles made up for it by creating a pair of protagonists I enjoyed rooting for. Carol and Johnny are engaging heroes, and I enjoyed the back and forth of their distinct POVs. Despite their not-infrequent clashing, watching the twins come back together and depend on each other during the story was a rewarding journey. The descriptions of the Mictlan and the frequent use of Spanish are also some of my favorite parts of the book.

Recommendation: Get it soon! The Smoking Mirror is an entertaining adventure story that moves at a quick pace and features a memorable and underrepresented mythology. While the book isn’t without its flaws, it nevertheless kept my attention on the story it was trying to tell. I’m happy to learn that the next book was recently released—I think this series would be a great addition to one of my younger sibling’s bookcase.

“Castle Horror Podcast: Interview: David Bowles, author of ‘A Kingdom Beneath the Waves’”

One Reply to “Review: The Smoking Mirror”