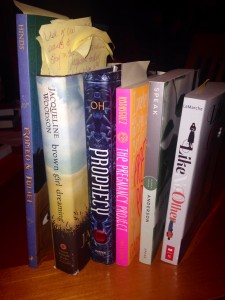 At the beginning of the year, I wrote a lengthy essay about how I intended to incorporate diverse texts into the Common Core curriculum and laid out my first semester plan. At our semester break, I gave an update with my success and my challenges. Well, the school year is about to come to a close, with finals being next week (yay!), so I thought I’d reflect on how the first year of full implementation of the Common Core standards went.

Well, to be blunt, this year was a tough one and I’m glad it’s just about over. As I stated in an earlier Common Core post, my students are low-skilled therefore they struggled with much of what the standards asked of them. In order to help them attempt to even come close to meeting the standards, I had to slow down my pace which resulted in me having to make a tough decision. I usually teach Shakepeare’s Romeo and Juliet, in combination with Sharon Draper’s Romiette and Julio which meets Literary Standard 8.9,  “Analyze how a modern work of fiction draws on themes, patterns of events, or character types from myths, traditional stories, or religious works such as the Bible, including describing how the material is rendered new.” This year I had planned to really dig into poetry by reading Jacqueline Woodson’s Brown Girl Dreaming, and then having the students write a memoir of their own lives using verse. I was really excited about the prospect of digging into poetry before Shakespeare, but alas, that dream was not meant to be. My students struggled with writing arguments (which I know is tested), so I chose to forgo my exciting poetry unit and allow the students to spend more time analyzing and writing about the issues presented in All American Boys. It was a tough decision, but in the end a good one. 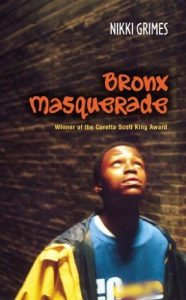 I didn’t end up skipping poetry entirely, but made it a shorter unit where the students just learned to analyze poetry by looking at a poem’s different elements and by writing a lot of poetry. We read Nikki Grimes’s classic Bronx Masquerade, and the students really got into the book. They, again, connected with a number of the characters and found their own voices by seeing how open the characters were with their words. In addition, we were studying Bronx Masquerade during National Poetry Month, so the students were writing poems almost every day. I was astounded by the creativeness and the depths my students were willing to go to in expressing themselves with their poetry. We all had a lot of fun, while meeting more Common Core standards.

At the beginning of this month, my students took the SBAC (Smarter Balance Assessment Consortium) test. While I have not received the results of the test back yet, I am cautiously optimistic because I know that my students were prepared for the test. By slowing down my pace, I allowed my students to really think about what they were reading, analyze it, and then write about it. I gave them the tools to craft good arguments, and I saw these strategies come to fruition during the test. While I was not over their shoulders reading (or even giving feedback because that is against the law), my students took their time during both sections of the test, and were using all the tools the SBAC test provides. I was very pleased to see that my students were displaying the knowledge that they learned over the past school year.

So, what did I do with my students to wrap up the school year? Well, they are currently preparing to give a panel type presentation of a social experiment they performed last week. Because I teach 8th graders who are fidgety this time of year, I have them participate in a Rice Baby project, which ultimately grounds them in the last few weeks of school year. They read Gaby Rodriguez’s memoir, The Pregnancy Project and used it as a template to perform an experiment that tested people’s perceptions about teen parents, specifically teen parents of color. Again, students really got into the novel, especially since Gaby is Mexican-American like many of my students. They enjoyed discussing the novel and got into the research, planning, and execution of their experiment. At this date, they are working on their experiment write-ups and preparing their panel presentations where they will share their conclusions from the project. This project, again, meets a number of the Common Core standards, yet has the students engage with the standards in a unique way, that connects to their daily lives.

Overall, I’ve worked hard this year to help my students get to where I want them to be and I can only hope that when they begin their high school careers in the fall, they feel like the education they received from me was worth it.