Please welcome Dhonielle Clayton to Rich in Color! Today is the release day for Shiny Broken Pieces, Dhonielle and co-author Sona Charaipotra’s sequel to Tiny Pretty Things. We are very excited about this book, and it’s a treat to have Dhonielle with us today. She has some great advice for people looking to “layer” diversity in their works. 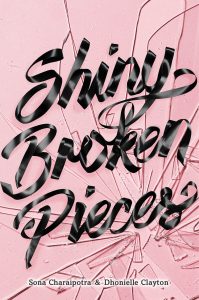 veryone hates the word organic. It’s such a buzzword these days – organic vegetables, organic meat. People even want to meet “organically” and fall in love.

But my Tiny Pretty Things and Shiny Broken Pieces co-author Sona Charaipotra and I started writing together, we wanted to create a new recipe for how diversity is presented in YA fiction. We wanted to create and cultivate the concept of “organic diversity.” Translation? Our recipe centers on mining the ways our own cultures interact with our everyday lives. It’s one of the driving forces in every book that comes from CAKE Literary, the decidedly diverse book packaging we company we co-founded.

Shiny Broken Pieces picks up a few months after Tiny Pretty Things ends. The girls are in various states of chaos after what happened the preceding school year. We wanted it to read almost like the second season of a TV show. More backstory, the deepening of complex relationships, new character goals. But we also wanted to make sure the diversity of the book continued to grow.

Here are three ways we continued to layer in diversity into Shiny Broken Pieces – without spoilers:

Layer In Lived Experience:
As a person of color, there are certain truths I hold to be self-evident – but not everyone would recognize them. For example, I cover my hair when it rains because otherwise chaos ensues. And I won’t eat watermelon because the cultural context of it, as a black woman, has been drilled into me from childhood. It’s the principle of thing.

For Sona, it’s little things, too, like starting her day with a cup of homemade chai (and cringing when people call it chai tea). Or correcting people when they call her Sonia with an i.

TIP: These little things stack up to define our daily experience, and build quirks and character in an organic way. Many of them are racially or culturally relevant tidbits, and scattering these type of real life details into text is a natural, organic way to build in diversity – the lived experience of it, and the way it informs the lens through which the character views the world.

Micro-Aggressions Anyone?
The girls in Shiny Broken Pieces have a lot of feelings. They feel all the feels. All the time. And those feelings drive some of their darker impulses. However, for all three of our narrators, we wanted to explore how several of these uncomfortable moments stem from the intersection of class, race, ethnicity, and sexism.

The ballet world is already rife with racism, sexism, ageism, and every other “ism” you could name. However, for each of our narrators – one being Black American, one being White American, and one being Asian American – they navigate this milieu in three different ways. We wanted to compare and contrast how the ballet world treats them as an undercurrent to the plot. To ignore this would be inauthentic. And while there are big truths about race and culture revealed in the text, most come from small, uncomfortable confrontations – frequently moments where the perpetrator may not even realize they are being racist. Moments that all marginalized people have experienced. Often on a weekly basis.

We Are Not A Monolith:
One major thing to remember when writing diverse characters: even within a community, there is no one experience. So creating varied representation on the page is important.

In Shiny Broken Pieces, as June delves deeper into a relationship, she’s confronted with her biracial identity in multiple ways. Spoiler alert: she starts dating someone who is also Korean. This budding relationship makes her confront many new realities and feelings, but it also forces her to discover all the different ways to be Korean.

TIP: One culture is not a monolith. Use it to explore how people can have membership to a group and share commonalities yet navigate the world so completely differently.

Love Will Bring Us Together! (Or Not.)
Just like with organic meat and vegetables – and even organic love – it’s better when it comes naturally. The fun balance to writing organic diversity is to mine the real world to populate the fictional. Lived experiences and emotions help to thicken the whatever fictional universe writers create. And in YA, especially, so much of the teen experience is focused on like, lust and love.

Romantic love can be a fascinating space in which to explore interracial relations. Gigi and Alec face many challenges because of who they are and the communities they come from – they’re very different people who have had very different lived experiences. However, there are connections and commonalities that bring – and keep – the pair together. These don’t make the tensions disappear, not by a long shot.

TIP: Given the diversity of the population, interracial and intercultural love connections are organic and fascinating opportunities to explore the tensions between communities. But make sure we get why your characters – especially if they come from starkly different backgrounds – connect in the first place, and work to stay together. 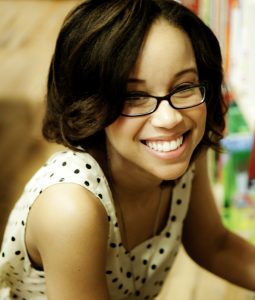 Dhonielle Clayton was born in the suburbs of Washington, DC and spent her childhood Saturdays at the comic book store with her father and most evenings hiding beneath her grandmother’s dining room table with a stack of books. She earned a BA in English at Wake Forest University. She was an English teacher for three years and worked with educational curriculum. Being surrounded by children, Dhonielle re-discovered her love of children’s literature and earned a masters in children’s and young adult literature from Hollins University. Currently, she is working on both middle grade and young adult novel projects. She moved to NYC where she earned her MFA at the New School’s MFA Program. She is co-founder of CAKE Literary, a literary development studio committed to bringing diversity to high concept content.