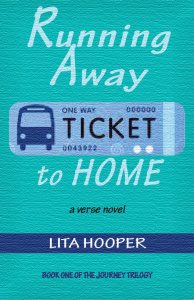 Summary:  How do you find your way home when your home no longer exists? For 17-year old twin sisters Sammie and Ronnie and their father, Willis, the answer to that question becomes a life raft when they are displaced after Hurricane Katrina.
Identity….Fear….Family
Running Away to Home, a YA verse novel, tells the story of two brave sisters, a repentant father, and the amazing triumphant spirit of familial love.
Loss.…Memory….Family
After leaving New Orleans for Atlanta, Ronnie and Sammie are separated and find themselves living in different parts of the city. Each sister is lured by false promises of love and security as they initially believe the people they encounter.
Love….Change….Family
As a YA verse novel, this story relies on poetry to express the intimacy of sisterhood and the triumphant spirit of its characters. Older YA readers will be moved by this family’s journey in the wake of one of the most memorable historical events our nation has experienced.
Spirit….Strength….Family

Review: With the 11 year anniversary of Hurricane Katrina coming up and Louisiana under water again, Lita Hooper’s novel is especially timely. The story of Sammie & Ronnie is a very real one as families were separated as they fled New Orleans and were sent to different cities close by. Many of the stories I heard from Katrina were truly heart-breaking, so I applaud Ms. Hooper for tackling such a painful subject matter.

While Sammie and Ronnie are the main protagonists, Hooper also includes the voices of their father, and the people who “help” both of the girls when they separate. I put “help” in quotations because the people who decide to take in both Sammie and Ronnie only do so to serve their own interests. They lie to both of the girls about FEMA and their families, hence keeping both girls right where they want them. While neither girl is physically hurt, the emotional damage done to both hurt my heart.

While I felt for the girls, I didn’t care as much as I could have because I couldn’t really connect with either characters. Both Ronnie and Sammie felt very two dimensional and I didn’t get a feel of what made both girls who they are. They felt more like composite characters, there just to propel the action of the story, rather than be the heart of the story. It was stated that Ronnie was an studious honor student, and I get that in times of distress people don’t make rational decisions, but easy acceptance of her “savior’s” lies just struck me as odd. Additionally, Sammie was supposed to be the naive sister, however she came across as child-like instead of just a careless teenager. The writing for both characters was so simplistic that I didn’t get a grasp of Ronnie’s and Sammie’s feelings, how they truly felt about being separated from their twin. I feel like Hooper had a chance to go deeper, and for whatever reason, didn’t.

I understand that novels written in verse are tricky things, but I’ve read some verse novels that just floored me. I feel like Hooper could have slowed down some of the events in the novel, such as when the girls get separated, and explore the girls’ emotional response to their situation. This novel was very plot driven, which can be good, when it doesn’t come at the expense of characterization. Ultimately, that is what made the novel feel flat for me.

Recommendation: I was excited about this book based on the premise, but was disappointed in the execution.