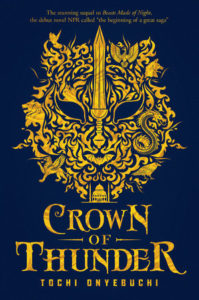 Title: Crown of Thunder (Beast Made of Night #2)

Summary: In the sequel to the acclaimed Beasts Made of Night, Taj has escaped Kos, but Queen Karima will go to any means necessary—including using the most deadly magic—to track him down.

As Taj and Aliya explore their feelings for each other and Arzu connects with her homeland, the local westerners begin to question Taj’s true identity. Karima is on his heels, sending dark warnings to the little village where he’s hiding. Taj will have to go back and face her before she sends her mostly deadly weapon—Taj’s former best friend, Bo.

Review: I really enjoyed Beast Made of Night and was upset that it ended on a cliffhanger, therefore I anxiously anticipated the sequel. Crown of Thunder takes place a few days after the end of Beasts Made of Night finding Taj, Aliya, and other sin-eaters on the run from former princess, now Queen Karima. It somewhat feels like a “grand adventure” for Taj and the reader as we experience the larger world outside of Kos. However, Taj often reflects that while he is somewhat enjoying learning about other peoples, seeing the larger world, it is coming at a horrible cost and he feels tremendous guilt about all the people he’s left behind to suffer under the Queen.

In this book, Taj is a lot more thoughtful and reflective of his life before, what led up to fall of Kos, and what he must do to try to save his city. Often in Heroes Journey stories the hero is so caught up in trying to survive that they often don’t have much time to reflect on their situation. Onyebuchi destroys that trope by basically having Taj repeatedly go off on his own, sometimes to his own endangerment, to ponder about what he needed to do and to get himself prepared for a fight that he really didn’t want to participate in. Taj is a beautifully flawed hero in that he’s put in a situation where based on his growing power he really is “the chosen one” but he doesn’t want the responsibility. In fact, he tries to avoid it, desiring to stay in Arzu’s home village, but when the village that is full of Kos refugees is attacked, Taj realizes that he must fight.

This emotional journey, in addition to the physical journey, is what makes Crown of Thunder so interesting. There are many more quiet moments in this book, where as the first one was a lot more action packed, but the moments of action are a lot bigger and more brutal. Taj is basically loosing the entire story, which is very different for a heroes journey story. One also feels the despair from the residents of Kos who are on the run and how it feels to lose people you care about, not by death, but just the unknowing.

While Beasts Made of Night was fun, Crown of Thunder had more depth, was darker, and often left me feeling quiet sad for everyone involved. At times I didn’t enjoy the novel but that is because Onyebuchi really brought alive what it feels like to flee war. It’s not an adventure, it is sorrowful and dispiriting. When I realized what was going on with my emotions, I realized what a master storyteller Onyebuchi was and ended up appreciating the journey he took me on.