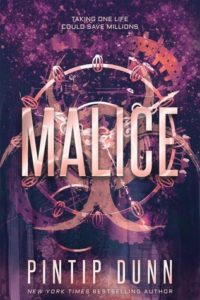 Summary: What I know: a boy in my school will one day wipe out two-thirds of the population with a virus.
What I don’t know: who he is.
In a race against the clock, I not only have to figure out his identity, but I’ll have to outwit a voice from the future telling me to kill him. Because I’m starting to realize no one is telling the truth. But how can I play chess with someone who already knows the outcome of my every move? Someone so filled with malice they’ve lost all hope in humanity? Well, I’ll just have to find a way—because now they’ve drawn a target on the only boy I’ve ever loved…

Review: If you’re in the mood for a thriller with a dash of science fiction and an entertaining romance, you should add MALICE to your to-read list. Author Pintip Dunn does a great job of keeping the tension high throughout this fast-paced novel where a teenager has to stop an apocalyptic future from happening.

One of the things that made Alice a refreshing protagonist for me is that she isn’t the obvious star for a thriller. Even after she finally comes to believe that the Voice is from the future, Alice isn’t the kind of person who can just go murder someone, even if she knows they’ll someday do terrible things and she may be the only one who can stop them. Her constant questioning of her own morals and her personal capacity for violence makes her dilemmas all the more intriguing. Is violence even a possible solution for her? let alone the best one to prevent catastrophe?

Whether or not MALICE works for you will largely hinge on how much you’re invested in Alice’s romance with Bandit, and I’m happy to say that I rather enjoyed the two of them together. After an extremely (and intentionally) rocky beginning, it was rewarding enough whenever they opened up to each other that I could ignore most of my quibbles. Bandit was a great supporting character and just as complicated and interesting as Alice. The rest of the cast were far less developed, which was a small disappointment, but Alice and Bandit were strong enough that the world didn’t feel empty.

I have a few nitpicks for the book—I wanted the science-fiction elements to pop up more frequently than they did, and I didn’t care for a character’s motivations as revealed in the climax—but overall MALICE was a gripping read. I plowed through it in just a couple days, and it kept my attention all the while.

Recommendation: Get it soon if you enjoy high-stakes conflict as the catalyst for your romances. There are a lot of interesting ideas lurking about in MALICE, and while not all of them went the way I’d hoped, you’ll likely have fun with this book if you are a fan of thrillers.